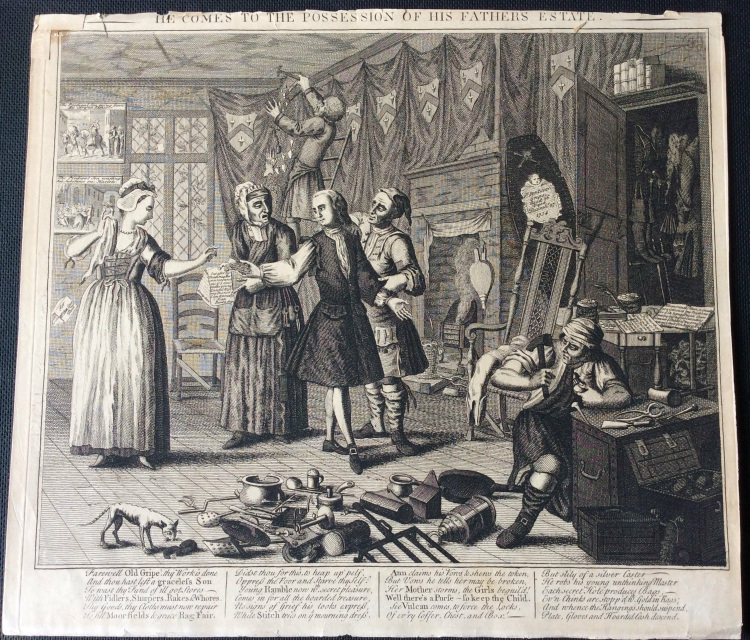 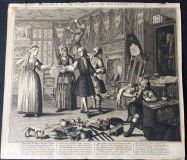 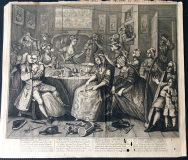 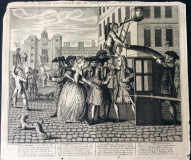 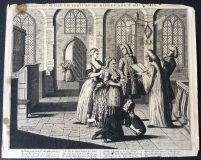 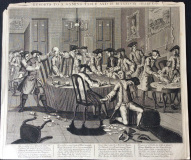 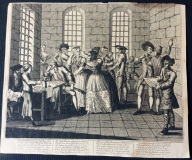 He comes to the possession of his fathers estate, Plate 1

With common whores at a tavern in Dury Lane, Plate 3

Going to court he is arrested at St James Gate, Plate 4

To repair his fortune he marries a rich old woman, Plate 5

Resorting to a gaming table and is ruined by sharpers, Plate 6

Copper plate engraved. By Anonymous. All from 'The progress of a rake, exemplified in the Adventures of Ramble Gripe Esq son of Sir Positive Gripe' A plagiarism of Hogarth's 'Rake's Progress' presumably rushed out before the Copyright Act of June 1735 limited the many copies of Hogarth's work.

Fitzwilliam Museum Cambridge UK: There are, amongst the twenty-four volumes of Hogarth's works deposited with the Print Room by Christ's College, three sets of engravings which appear to be identical with the set reproduced here.

British Museum Ref: (You can see copies in the BM online catalogue)

BM Curator's comment: This is one of the piracies that Hogarth complained of in the "London Evening Post" for 3 June 1735 (three weeks before the Engravers' Copyright Act came into force and the publication of A Rake's Progress): "Print sellers who have of late made their chief Gain by unjustly pyrating the Inventions and Designs of ingenious Artists, whereby they have robb'd them of the Benefit of.

Notes: Ref: London Daily Advertiser June 3rd 1735 "Now printing and in a few days will be published, the Progress of a Rake, exemplified in the Adventures of Ramble Gripe Esq; Son and Heir of Sir Positive Gripe; curiously designed and engraved by some of the best Artists" The ingenious publishers were the best-known London print sellers Henry Overton, Thomas and John Bowles, and John King (Hogarth, High and Low Art 1732-1750 p42, by Ronald Paulson.) William Hogarth - A Rake's Progress 1735 The eight paintings for the original series are now in Sir John Soane's Museum. They were Hogarth's second series of ?modern moral subjects? and were painted soon after the publication of ?A Harlot's Progress? in 1732. The subscription for the prints after them began in late 1733, but Hogarth delayed publication until 25 June 1735, the day the Engravers' Copyright Act became law. Even so, pirated copies had already appeared by that time. The set cost two guineas, but Hogarth had also a smaller and cheaper set, copied by Thomas Bakewell and costing 2s 6d, published soon after. The original copperplates were sold by Quaritch in 1921 and are now in a private collection. Louis G?rard Scotin.