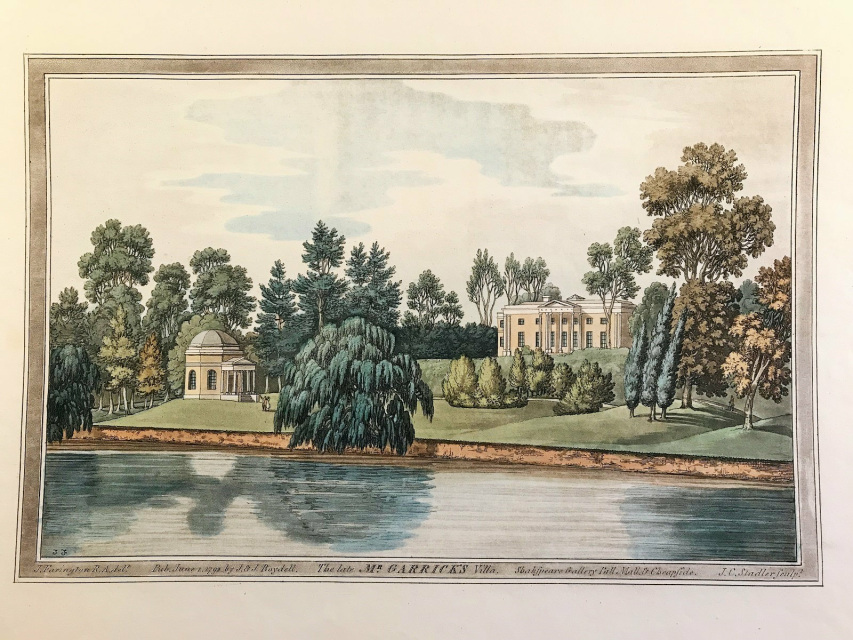 River Thames Hampton House GARRICK's VILLA c1793 by Farington, Stadler col. Volume I, Plate 45 From Joseph Farington's (1747-1821) 'History of the River Thames', 1794, A two-volume publication including 76 aquatints. A view of Hampton House on the River Thames. Two figures can be seen in front of a temple to the left, with the house to the right, and the river in the foreground. The house was initially listed as Hampton House prior to its acquisition by the hugely influential actor and playwright, David Garrick (1717 - 1779), in 1754. Numerous alterations were made to the villa during Garrick's tenure by the famous architect Robert Adam.

Notes: As first published on folio sheet: 16" x 12" (420mm x 310mm). One of the grandest and most important books on the Thames. "although not the first coloured aquatint book, [it] was the first major one, and it was to set an example for the type of illustration that was to enjoy widespread popularity in England for some forty years" - Bruntjen (John Boydell 1719-1804).