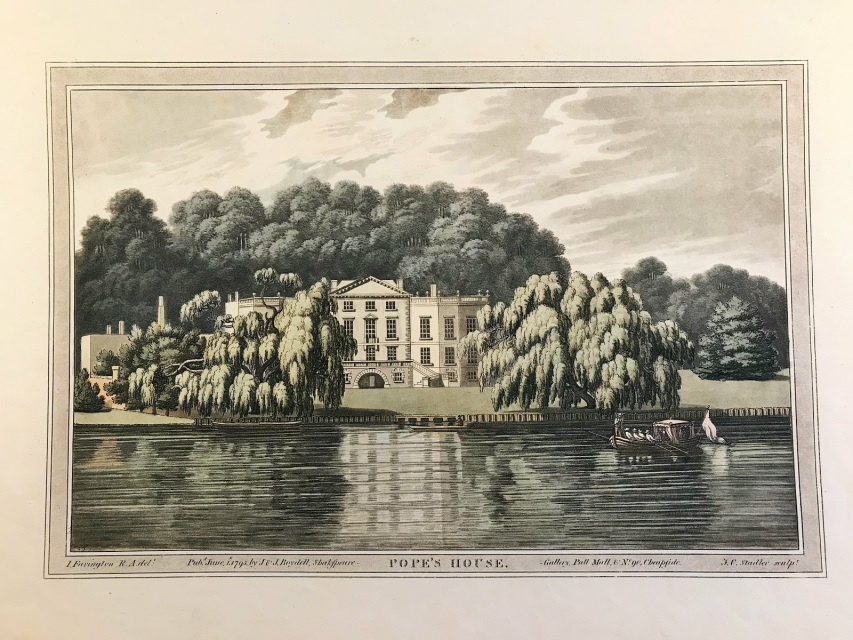 POPE'S HOUSE Twickenham River Thames c1793 by Farington, Stadler col. Volume II, Plate 48 from Joseph Farington's (1747_1821) 'History of the River Thames', 1794, A two-volume publication including 76 aquatints. A view of Alexander Pope's house along the River Thames in Twickenham. Four figures are rowing a canopied boat on the river in the foreground with a forest in the distance behind the house in the background. Alexander Pope was an 18th century English poet, best known for his satirical verse and his translation of Homer. The money Pope made from this popular translation allowed him to move to this villa at Twickenham in 1719, where he created his now famous grotto and gardens. Abbey: 432.

Notes: As first published on folio sheet: 16" x 12" (420mm x 310mm). One of the grandest and most important books on the Thames. "although not the first coloured aquatint book, [it] was the first major one, and it was to set an example for the type of illustration that was to enjoy widespread popularity in England for some forty years" - Bruntjen (John Boydell 1719-1804).