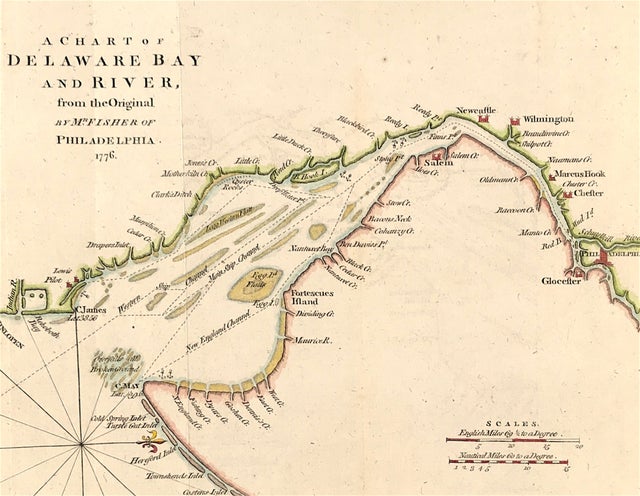 Notes: Chart of Delaware Bay and River. Derived from the larger chart of Delaware Bay and River up to Philadelphia, Pennsylvania by Joshua Fisher (1707-1783) in 1776. Shows the location of a Pilot's Town near Cape Henlopen. Identifies the ship channels from Cape May and Cape James up the Delaware River past Salem Mass., Wilmington, Newcastle, and Chester to the small town of Philadephia, Pennsylvania. Key features include Mud Island, the Schuylkill River, Stony Point, Egg Island Flats, Fortescues Island, Cold Spring Inlet, Turtle Gut Inlet, and Rehoboth Bay. The mouths of numerous creeks are named including Clark's Ditch, Motherkiln Creek, and Nantuxet Creek.

Joshua Fisher's early chart of Delaware Bay from the Sea-Coast to Reedy-Island was published during the French & Indian War, and was immediately suppressed by the Assembly, fearing that its falling into enemy hands would make Philadelphia a target of the French navy. Fisher's chart showed the lower part of the bay and was intended to be used as a navigational aid for ships sailing toward Philadelphia. In 1775, Fisher produced an expanded chart that showed the bay and the Delaware River to just beyond Philadelphia. This was the most important map of the bay and river in the 18th century.