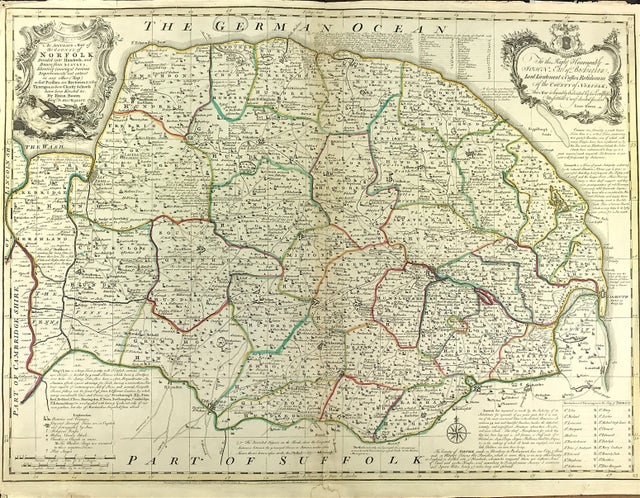 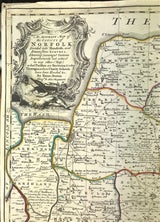 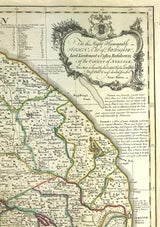 ORIGINAL ANTIQUE MAP OF NORFOLK (c1749 Dated in Plate) c1763 Edition An ACCURATE MAP of NORFOLK Divided into its HUNDREDS and Drawn from SURVEYS showing (amongst various Improvements not extent in any other map) What Parishes are Rectories & What Vicarages where Charity Schools have been Erected &c By Emanl: Bowen Geographer to His Majesty.

This is an impressive and finely detailed map with all available spaces filled with notes and descriptions of the history and topography of the county.

Copper engraving by Emanuel Bowen and later published in The Large English Atlas from 1760. The work was the first large scale atlas of English counties since the works of Blaeu and Jansson a century earlier and was based on the latest surveys available. The maps were a long time in preparation, the engraving work mostly shared between Emanuel Bowen and Thomas Kitchin, beginning in 1749 with the county of Sussex and reaching completion of 45 plates in 1760. During this time the plates passed through the hands of several publishers and were issued individually and in part works without title. The Large English Atlas was issued by various publishers until c.1794 with few changes to the maps.