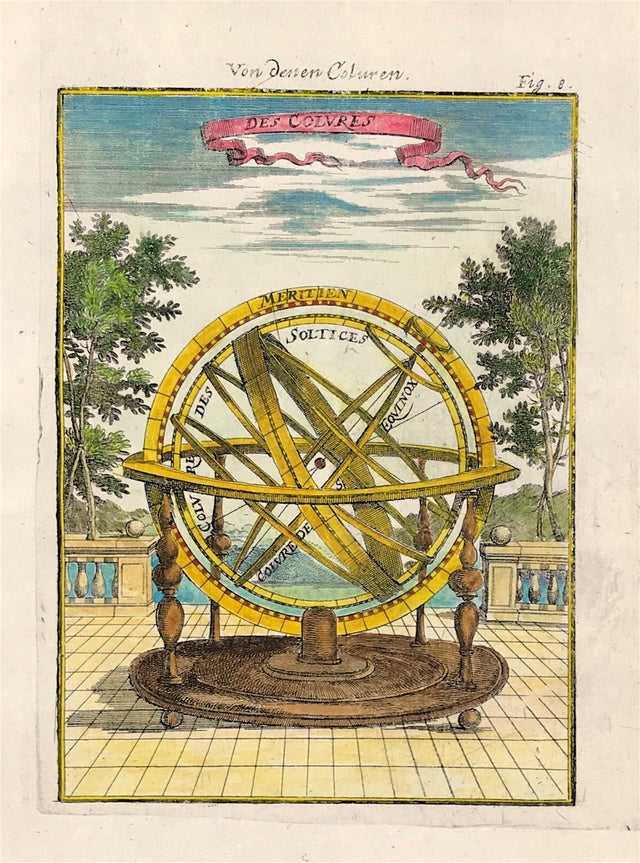 First published 1683 From Allain Manesson Mallet's ‘Description de l’Univers’. This from Volume 1 of the French text edition published by Johann David Zunner 1684 The plates engraved for Zunner are close copies of the originals and still have French titles and names. A few are signed by there engravers: J.P. Aubrey, Johann J. Vogel and W.C. Daucher.

This astronomical device shows the circles of the celestial sphere, and is used to demonstrate

the motion of the stars around the Earth. The circles surrounding the Earth include the plane of the ecliptic and the celestial equivalent of the equator, North and South Poles, and the Tropics of Capricorn and Cancer. Here the two main celestial meridians (colures) are marked, those of the equinox and the solstices. Armillary spheres were an important symbol of the rise of science in Renaissance Europe.

Allain Manesson Mallet was a French cartographer and engineer. He started his career as a soldier in the army of Louis XIV, became a Sergeant-Major in the artillery and an Inspector of Fortifications. He also served under the King of Portugal, before returning to France, and his appointment to the court of Louis XIV.