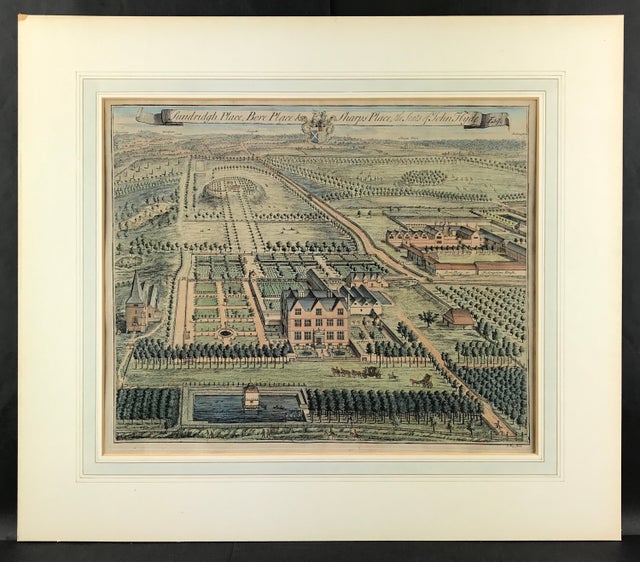 Bird's eye view in Kent, showing, in foreground, Sundridge Place,l with formal gardens, and church to the left, with small lake in front; to the right, behind Sundridge Place is Bore place, with large stables and walled gardens; fields behind, before Sharps Place is shown in the distance. Engraved by Johannes Kip after Thomas Badeslade for John Harris's 'History of Kent in Five Parts'. The title is on a scroll at the top of the plate, along with John Hyde's armorial.

John Hyde, esq. was of Sundridge-place, and died in 1729, leaving two sons; John, of the Temple, esquire; and Savile. After which, this manor seems to have been divided into moieties, called, from their different situations, Sundridge Upland and Sundridge Weald manors, the latter of which became the property of John Hyde, esq. who residing at Quarendon, in Leicestershire, about the year 1773, pulled down the antient Placehouse, leaving only a farm house in its stead; and the former became the property of Savile Hyde, esq.

Harris was a Doctor of Divinity, author and a Fellow of the Royal Society. For his History, he commissioned Badeslade, an artistically inclined surveyor, to illustrate his work. These drawings were then engraved by Johannes Kip (1652/3-1722), a Dutch draughtsman and engraver who moved to England, and who, together with Leonard Knyff, specialised in engraved views of English country houses.

Another genuine antique print over 300 years old from Rare Maps and Prints.