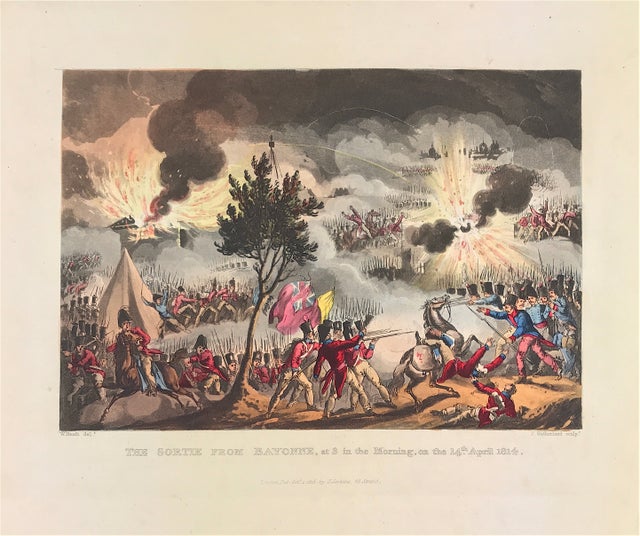 The Sortie from Bayonne c1814 SOLD!

Peninsular War: The Sortie from Bayonne at 3 in the morning, on the 14th April 1814. London Published Oct 1st 1815 by J. Jenkins, 48 Strand. An original aquatint print from "The Martial achievements of Great Britain and Her Allies from 1799 to 1815. London: Printed for James Jenkins, No 48, Strand, By L. Harrison & J. C. Leigh, 373 Strand. Included with the print is the original folio text pages account of the action as first published with the aquatint and watermarked J. Whatman 1812.

The terrible night-time clash outside Bayonne on 14th April 1814, that marked the end of the Peninsular War, but occurred after the abdication of the Emperor Napoleon on 4th April 1814. The Battle of Bayonne of 14 April 1814 was a sortie by General Thouvenot's French garrison of Bayonne during the siege of that city conducted by Allied forces under Lieutenant General John Hope. Followed, after his wounding and capture, by General Howard, who commanded the British, Portuguese and Spanish Corps blockading Bayonne.