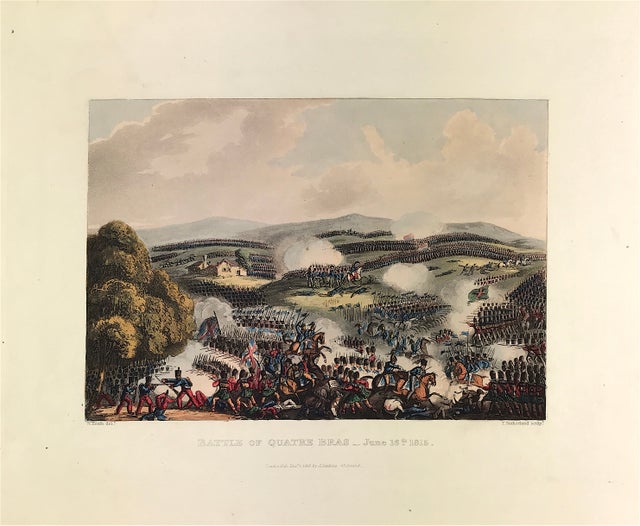 Waterloo Campaign: Battle of Quatre Bras Jun 16th 1815. London Published Dec 1st 1815 by J. Jenkins, 48 Strand. An original aquatint print from "The Martial achievements of Great Britain and Her Allies from 1799 to 1815. London: Printed for James Jenkins, No 48, Strand, By L. Harrison & J. C. Leigh, 373 Strand. Included with the print is the original folio text pages account of the action as first published with the aquatint and watermarked J. Whatman 1812.

The Battle of Quatre Bras was fought on 16 June 1815, as a preliminary engagement to the decisive Battle of Waterloo that occurred two days later. The battle took place near the strategic crossroads of Quatre Bras and was contested between elements of the Duke of Wellington's Anglo-allied army and the left wing of Napoleon Bonaparte's French Armée du Nord under Marshal Michel Ney. While the battle was tactically indecisive, Napoleon achieved his larger strategic aim of preventing Wellington's forces from aiding the Prussian army at the Battle of Ligny, which the French won the same day.