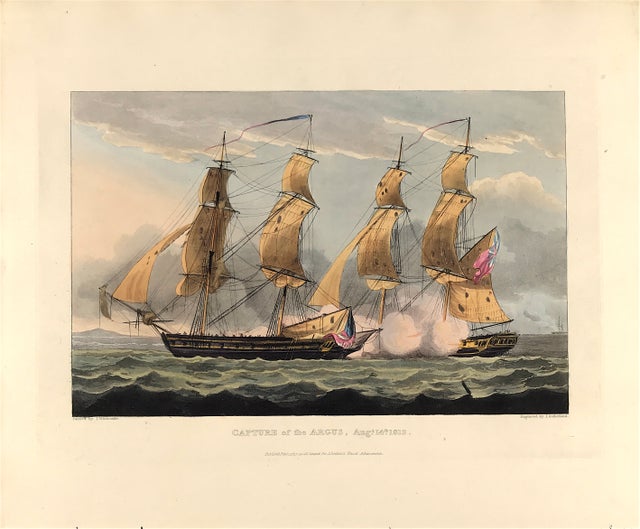 Capture of the Argus, Aug.t. 14.th. 1813. Painted by T. Whitcombe. Engraved by T. Sutherland. Publish'd Feb.y. 1. 1817 at 48 Strand for J. Jenkin's Naval Achievements.Included with the print is the original folio text page account of the action as first published with the aquatint, watermarked J. Whatman 1816.

Short extract from the folio text pages included: CAPTURE OF THE ARGUS, AUGUST 14, 1813. NOTWITHSTANDING every exertion was made by the squadron on the American station to blockade the ports of the enemy, it was found impossible to prevent their cruisers from putting to sea; and the partial success which attended their exertions at the commencement of hostilities, ﬂattered their vanity and raised. their hopes to an inordinate height: they expected to tear the wreath of laurel from the brows of British seamen, to bear away the palm of victory, and to ride the seas in triumph. The capture of the Chesapeake, followed by that of V the Essex and Argus, at once disappointed their hopes and defeated their intentions. The capture of the latter vessel, though of an inferior rate to the former, displays in an equal degree the characteristic valour and intrepidity of the sea- men of Great Britain, the heroism and abilities of her ofﬁcers, and that love of country which ever animates to the noblest exertions those engaged in the public service . . .