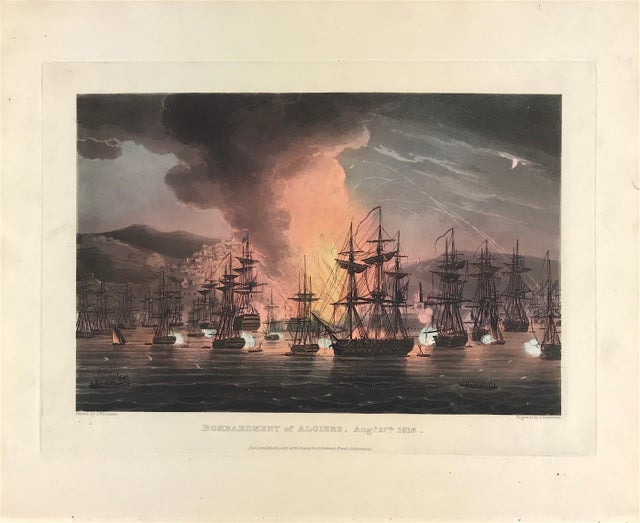 Bombardment of Algiers, Aug 27th 1816. Painted by T. Whitcombe. Engraved by T. Sutherland. Publish'd Mar 1st 1817 at 48 Strand for J. Jenkin's Naval Achievements. Included with the print is the original folio text pages account of the action as first published with the aquatint and watermarked J. Whatman 1816.

Short extract from the folio text pages included: BOMBARDMENT OF ALGIERS, AUGUST 27, 1816. THE bombardment of Algiers forms one of the most prominent features in the Naval Achievements of Great Britain, and may be considered equal in its consequences, equal in the display of skill, discipline, valour, and intrepidity, to any the most decisive victory obtained during the late or any preceding war. Stimulated by three most powerful incentives—honour, justice, and humanity—the fleet bore down to the attack in a manner and with a spirit which added new lustre to the renown and glory of the British navy. The ships anchored abreast of the batteries, and opened a tremendous fire of round and grape shot, accompanied with discharges of bombs and Congreve rockets, which carried destruction into every part of the town and harbour. ‘The cannonade continued above eight hours, when the whole of the enemy’s fleet being in flames, and the fortifications in ruins, the action ceased : and the next morning the Dey consented to restore all Christian slaves in his dominions, together with all sums of money received by him during the year for the redemption of slaves; to make reparation and an apology to the British Consul; and to abolish Christian slavery for ever. . .