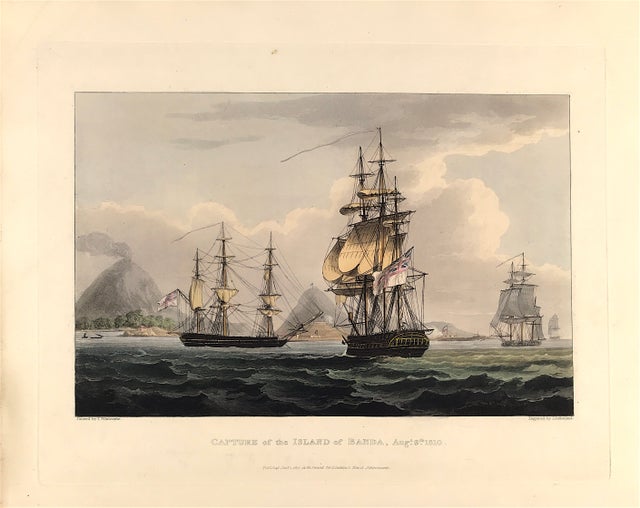 Capture of the Island of Banda, Aug 9th 1810. Painted by T. Whitcombe. Engraved by T. Sutherland. Publish'd Mar 1st 1817 at 48 Strand for J. Jenkin's Naval Achievements. Included with the print is the original folio text pages account of the action as first published with the aquatint and watermarked J. Whatman 1816.

Short extract from the folio text pages included: CAPTURE OF THE ISLAND OF‘M'BANDA, AUGUST 9, 1810 A SQUADRON of his Majesty’s ships, consisting of the Caroline, Piedmontaise, and Baracouta brig, with the Mandarin, a' transport, having on board 100 men of the Madras European regiment, with Specie and provisions for the supply of the Island of Amboyna, which had been captured the year before, quitted Madras in the month of May 1810, under the command. of Captain Christopher Cole of the Caroline, to effect a passage against a south-east monsoon. Captain Cole, on his arrival at Penang, a few days after he quitted Madras, determined to attempt something against those settlements of the enemy which he had to pass on his route to the Banda seas: for this purpose he obtained from the Company’s government at that place, a supply of two field-pieces, several scaling-ladders, and the aid of twenty artillerymen under a subaltern officer. After a most difficult passage through innumerable coral reefs, great part of which had never before been traversed by a large ship, the squadron arrived in the sea of Banda the beginning of August...