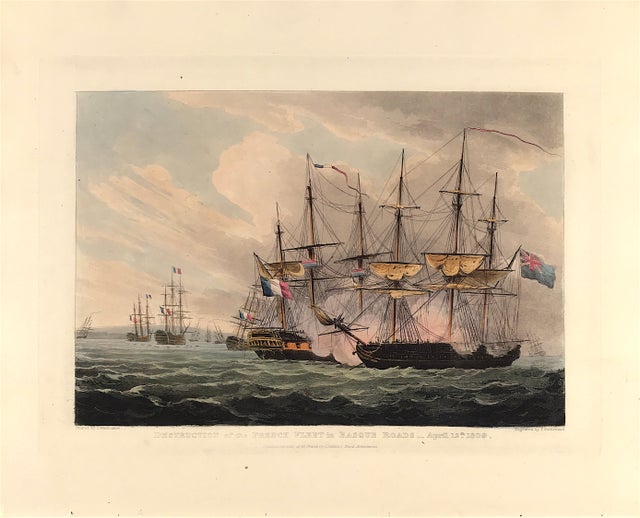 Destruction of the French Fleet in Basque Roads, Apr 12th 1809. Painted by T. Whitcombe. Engraved by T. Sutherland. Publish'd Feb 1st 1817 at 48 Strand for J. Jenkin's Naval Achievements. Included with the print is the original folio text pages account of the action as first published with the aquatint and watermarked J. Whatman 1816.

Short extract from the folio text pages included: DESTRUCTION OF THE FRENCH FLEET IN BASQUE ROADS, APRIL 19, 1809. THE annexed plate represents the gallant attack made by the Imperieuse of 38 guns, commanded by Lord Cochrane, on the French national ship Calcutta of 56 guns; which, after an action that reflects the highest honour on his lord-ship’s judgment, valour, and intrel'n'dity, he obliged to surrender, and soon after set her on fire. Extract of a Letter from Admiral Lord GAMBIER, addressed to the Hon. W. W. POLE, dated April 14, 1809. SIR,——The Almighty’s favour to his Majesty and the nation has been strongly marked in the success he has been pleased to give to the operations of his Majesty’s fleet under my command; and I have the satisfaction to acquaint you, for the information of the Lords Commissioners of the Admiralty, that the four ships of the enemy named in the margin“ have been destroyed at their anchorage ,' and several others, from their getting on shore, if not rendered altogether unserviceable, are at least disabled for a considerable time. . .