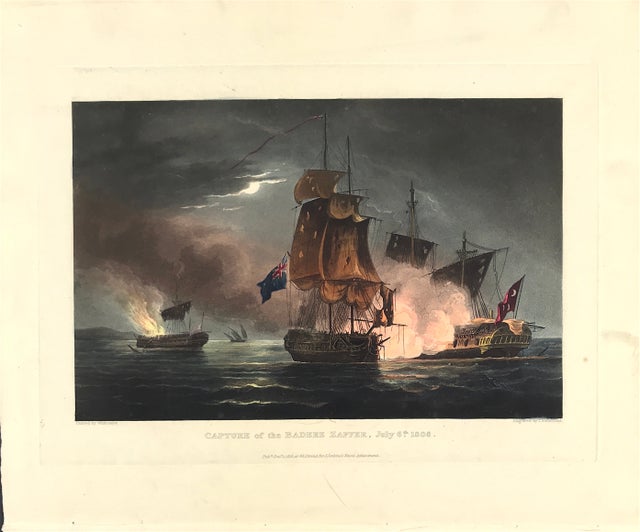 Capture of The Badere Zaffer, Jul 6th 1808. Painted by T. Whitcombe. Engraved by T. Sutherland. Publish'd Dec 1st 1816 at 48 Strand for J. Jenkin's Naval Achievements. Included with the print is the original folio text pages account of the action as first published with the aquatint.

Short extract from the folio text pages included: CAPTURE OF THE BADERE ZAFFER, JULY 6, 1808. IN consequence of the Turkish government having, through the influence of France, infringed the treaty of triple alliance entered into by Great Britain, Russia, and Turkey, an embassy was sent from England under Sir Arthur Paget, escorted by a squadron of ships under the command of Lord Collingwood, to endeavour to restore peace; but before Sir Arthur could reach the Dardanelles, the Emperor of Russia had made terms with Buonaparte, and had renounced the alliance with England. After an unsuccessful effort to obtain the desired object, Sir Arthur Paget returned to England, and Lord Collingwood resumed his station in the Mediterranean, leaving Captain J. Stewart, of the Seahorse frigate, in the Archipelago, with the usual orders to act against the ships and vessels of an enemy. . .