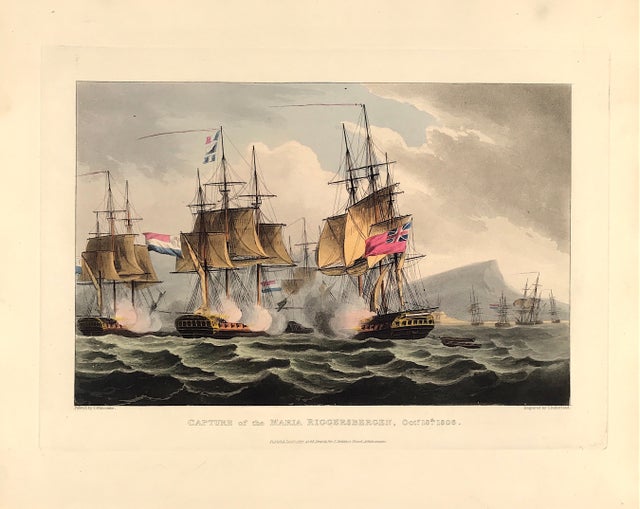 Capture of The Maria Riggersbergen 1806

Capture of The Maria Riggersbergen, Oct 18th 1806. Painted by T. Whitcombe. Engraved by T. Sutherland. Publish'd Jan 1st 1817 at 48 Strand for J. Jenkin's Naval Achievements. Included with the print is the original folio text pages account of the action as first published with the aquatint.

Short extract from the folio text pages included: CAPTURE OF THE MARIA RIGGERSBERGEN, OCTOBER 18, 1806. THE annexed plate is a representation of the gallant attack made by the Caroline frigate of 36 guns, commanded by Captain P. Rainier, on a Dutch squadron in Batavia Roads, which terminated in the capture of one frigate of equal force, and the Zeerop of 14 guns; one frigate, the Phoenix of 36 guns, the Willia of 20 guns, the Patriot of 18 guns, the Zeeploong of 14 guns, the Maria of 6 guns, and seven merchant-ships, being driven on shore. Copy of a Letter from Captain P. RAINIER, to Rear-Admiral Sir T. TROUBRIDGE, dated Batavia, October 29, 1806. SIR,——After putting the former part of your orders in execution, and receiving information that the enemy’s line-of-battle ships were all to the eastward, in the morning of the 18th instant I captured a small Dutch brig from Bantam, and having learned that the Phoenix. . .