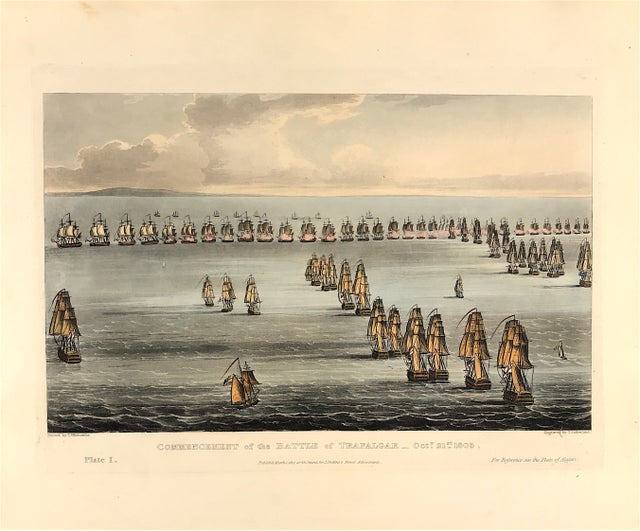 Battle of Trafalgar 1805 Plate I SOLD!

Battle of Trafalgar Oct 21st 1805. Plate 1. Painted by T. Whitcombe. Engraved by T. Sutherland. Publish'd Mar 1st 1817 at 48 Strand for J. Jenkin's Naval Achievements. Included with the print is the original folio text pages account of the action as first published with the aquatint.

Short extract from the folio text pages included: BATTLE OF TRAFALGAR, OCT. 21, 1805. P L A T E I. LORD NELSON sailed from Portsmouth, September 15th, accompanied by the Euryalus frigate; and on the l7th was joined off Plymouth by the Ajax and Thunderer of 74 guns. On the 18th his lordship joined Admiral Collingwood off Cadiz, and was received by the Whole fleet with every demonstration of joy. The next day his lordship imparted to the different admirals and captains the mode of attack which he meant to pursue, in case the enemy should venture to put to sea. The Euryalus was stationed close off the harbour of Cadiz for the purpose of watching the movements of the enemy : a little farther off was stationed a detachment of line-of-battle ships, to prevent the escape of any small squadron of the enemy; besides which, his lordship posted a line of frigates, which communicated by signal with the whole fleet. At length his lordship was informed, by signal, that the enemy had put to sea. On Monday, October 21, at daylight, he saw the combined fleet; he immediately. . .