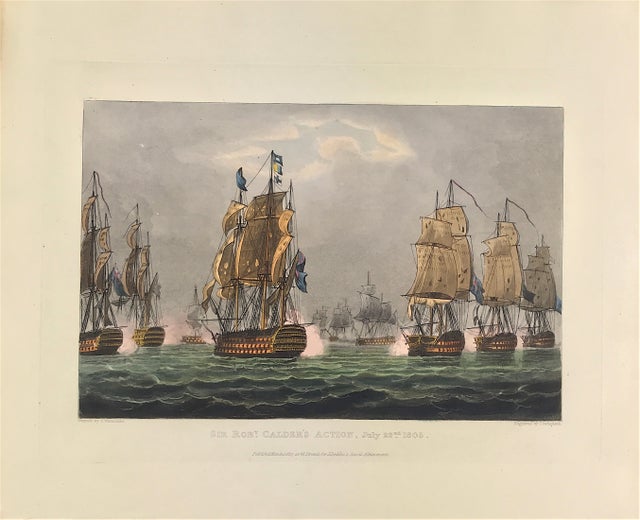 Short extract from the folio text pages included: SIR ROBERT CALDER’S VICTORY, JULY 22“, 1805. THE annexed plate represents the situation of the British fleet while engaging that of the enemy on the 9er July, 1805. In the centre is the Prince of ‘Vales, Vice-Admiral Sir R. Calder; ahead of which are the Defiance and Windsor Castle. In the distance is the French admiral’s ship; to the right of which is the Spanish ship San Rafael, which struck to the Prince of Wales. TO the right are the Repulse, Reasonable, and Glory. Copy of a Letter from Sir R. CALDER, to the Hum Admiral CORNWALLIS, dated PRINCE or WALES, July 23. SIR---, Yesterday at noon, lat. 43 deg. 30 min. N. long. 11 deg. 17 min. W. I was favoured with a view of the combined squadrons of France and Spain, consisting of twenty sail of the line, also three large ships, armed en flute, of about 50 guns each, with five frigates and three brigs: the force under my direction at this time consisting of fifteen sail of the line, two frigates, a cutter,and a lugger. Iimmediately. . .