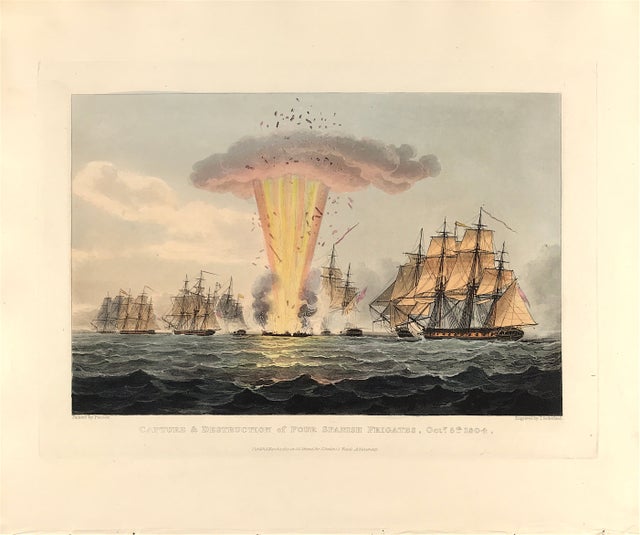 Capture & Destruction of Four Spanish Frigates Oct 5th 1805. Painted by T. Whitcombe. Engraved by T. Sutherland. Publish'd Mar 1st 1817 at 48 Strand for J. Jenkin's Naval Achievements. Included with the print is the original folio text pages account of the action as first published with the aquatint.

Short extract from the folio text pages included: CAPTURE AND DESTRUCTION OF FOUR "SPANISH FRIGATES, OCTOBER 5, 1804 Extract of a Letter from Captain GRAHAM Moons, to the Hon. Admiral CORNWALLIS, dated October 6, 1804. SIR,—-Yesterday morning, Cape St. Mary bearing N. E. nine leagues, the Medusa made the signal for four sail W. by S.: I made the signal for a general chase; at eight a. m. discovered them to be four large Spanish frigates, which, on our approach, formed a line of battle ahead, and continued to steer on for Cadiz ; the van ship carrying abroad pennant, and the ship next to her a rear-admiral’s flag. Captain Gore’s being the headmost ship, placed the Medusa on the weather beam of the commodore; the Indefatigable took a similar position along side the rear-admiral; the Amphion and Lively each taking an opponent in the same manner, as they came up. After hailing to make them shorten sail, without effect, I fired a shot across the rear-admiral’s fore-foot. . .