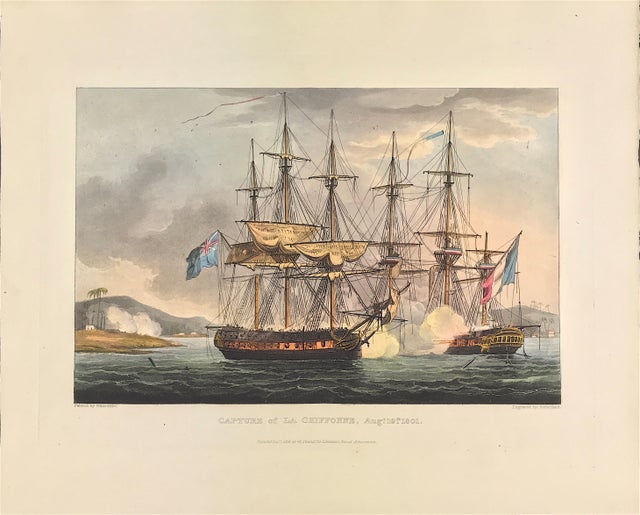 Capture of La Chiffonne Aug 19th 1805. Painted by T. Whitcombe. Engraved by T. Sutherland. Publish'd Mar 1st 1817 at 48 Strand for J. Jenkin's Naval Achievements. Included with the print is the original folio text pages account of the action as first published with the aquatint.

Short extract from the folio text pages included: CAPTURE OF LA CHIFFONNE, AUGUST 19‘, 1801. CAPTAIN C. ADAM of the Sibylle, being off the” Seychelles, observed signals flying on one of the islands; upon which he hoisted French colours, and stood round the island, when he discovered a large French frigate at anchor in the roads, the passage to which was extremely intricate: he, however, determined at all hazards to stand in. At a quarter past ten a. In. he had passed the most dangerous shoals, and got within a cable’s length of his opponent, when he came to an anchor with a spring on the cable, hoisted English colours, and commenced action. After a severe contest of twenty minutes,ithe enemy was under the necessity of striking his colours. Copy of A Letter from Vice-Admiral RAINIER, Commander in Chief of his Majesty’s Ships and Vessels in the East Indies, to EVAN NEPEAN, Esq. dated in Madras Roads, September 29, 1801. SIR-- I have at present nothing very particular to communicate to you for their Lordships’ information, beyond what may be collected from the disposition-list of his Majesty’s squadron under my command, except the capture of the French national frigate Chiffonne. . .