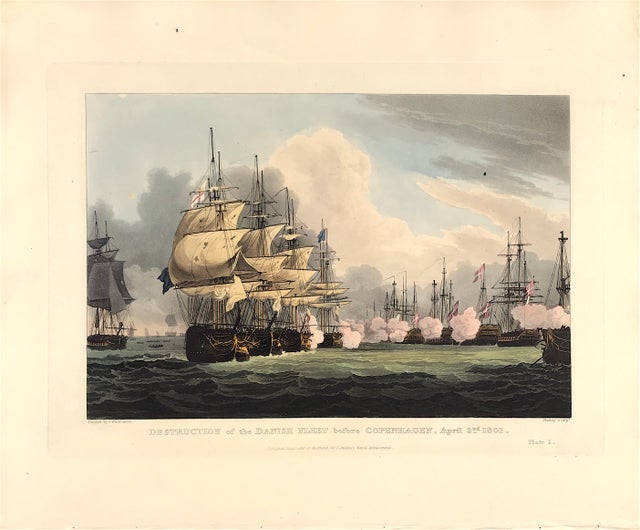 Destruction of the Danish Fleet before Copenhagen Apr 2 1801. Plate I. Painted by T. Whitcombe. Engraved by Bailey. Publish'd Jun 1st 1816 at 48 Strand for J. Jenkin's Naval Achievements. Included with the print is the original folio text pages account of the action as first published with the aquatint.

Short extract from the folio text pages included: THE annexed engraving represents the time when the British line was inverting, by which the headmost became the sternmost ship when at anchor. In order to explain the causes which led to the Northern confederacy, and the destruction of the Danish fleet, it is necessary to go back to the month of December, 1799, when the Danes thought proper to' resist the right of search exercised by Great Britain and every belligerent state. The circumstances of the case are, that a Danish frigate, with a convoy, was stopped in the Mediterranean by an English ship, the commander of which sent on board the Dane to know his destination, who replied, that he was going to Gibraltar. He was then informed, that as he was going to stop in the bay, no visit should be paid his convoy; to which the Danish captain answered, if such a step were attempted, he should certainly resist it. After receiving this answer. . .