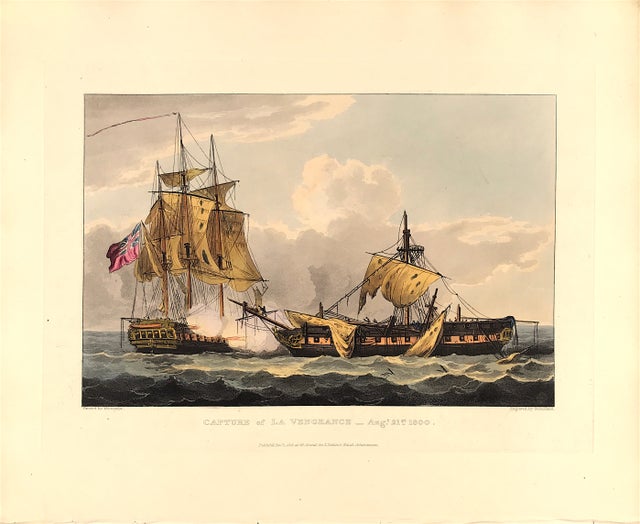 Capture of La Vengance Aug 21st 1800. Painted by T. Whitcombe. Engraved by T. Sutherland. Publish'd Dec 1st 1816 at 48 Strand for J. Jenkin's Naval Achievements. Included with the print is the original folio text pages account of the action as first published with the aquatint and watermarked J. Whatman 1816.

Short extract from the folio text pages included: CAPTURE OF LA VENGANCE, AUGUST 21, 1800. Copy of a Letter from Vice Admiral Lord HUGH SEYMOUR, to EVAN NEPEAN, Esq. dated Port—Royal Harbour, August 31. SIR,——-I have very sincere pleasure in forwarding to you, for the information of the Lords Commissioners of the Admiralty, a letter which I have received from Captain D. Milne of his Majesty’s ship Seine, describing an action which does great honour to him, his officers and ship’s company, and which ended in the capture of the French republican frigate La Vengeance, a ship of a very superior force to that which he commanded. Captain Milne has done so much justice to his officers and men by his report of their conduct on that occasion, that I have only to offer my congratulations to their Lordships upon the success which attended their exertions, and to express my hope, that it will receive marks of their Lordships’ favour proportioned to. . .