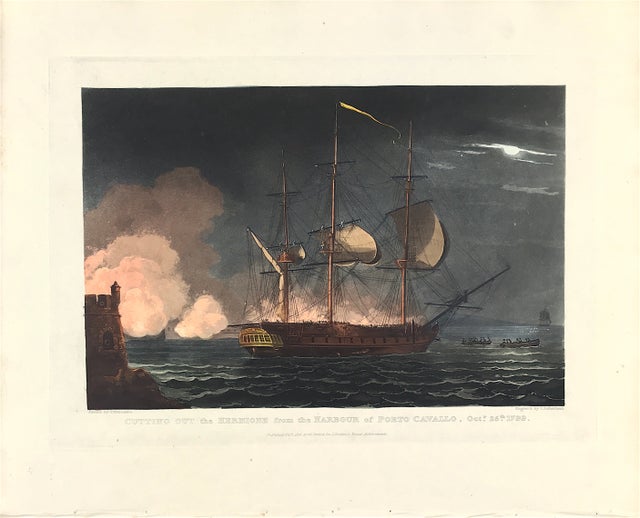 Cutting Out the Hermione 1799

Cutting Out the Hermione from the Harbour of Porto-Cavallo Oct 25, 1799. Painted by T. Whitcombe. Engraved by T. Sutherland. Publish'd Oct 1st 1816 at 48 Strand for J. Jenkin's Naval Achievements. Included with the print is the original folio text pages account of the action as first published with the aquatint and watermarked J. Whatman 1816.

Short extract from the folio text pages included: CUTTING OUT THE HERMIONE FROM THE HARBOUR OF PORTO—CAVALLO, OCTOBER 25, 1799." Copy of a Letter from Sir HYDE PARKER Knight, Commander in Chief of his Majesty’s Ships and Vessels at Jamaica, to EVAN NEPEAN, Esquire, dated at Port-Royal, November 4. SIR,——I have peculiar satisfaction in communicating to you, for the information of my Lords Commissioners of the Admiralty, that his Majesty’s late ship Hermione is again restored to his navy, by as daring and gallant an enterprise as isto- be found in our naval annals, under the command of Captain Hamilton himself, with the boats of the Surprise Only. Captain Hamilton’s own letter, with 'the reports. accompanying it, will sufficiently explain to their Lordships the detail of this service, and the bravery with-which» the attacks were supported, leaving me only one observation to make on this very gallant action, which adds.infinite honour-to Captain Hamilton as an officer, for his conception of the service he was about to undertake. This was, sir, his disposition for the attack...