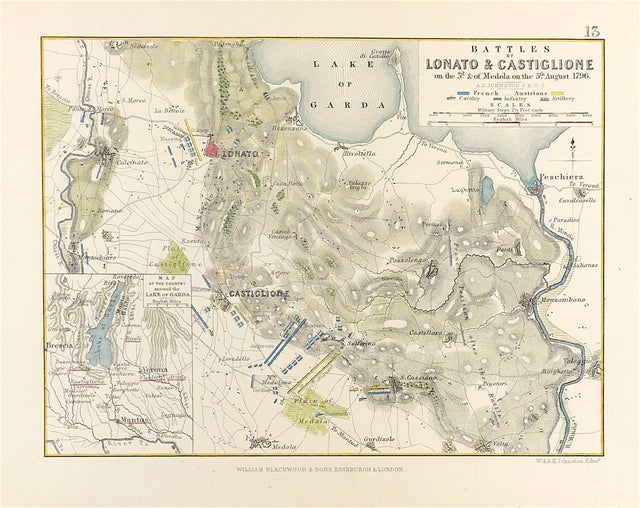 The Battle of Lonato was fought on 3 and 4 August 1796 between the French Army of Italy under General Napoleon Bonaparte and a corps-sized Austrian column led by Lieutenant General Peter Quasdanovich. A week of hard-fought actions that began on 29 July and ended on 4 August resulted in the retreat of Quasdanovich's badly mauled force. The elimination of Quasdanovich's threat allowed Bonaparte to concentrate against and defeat the main Austrian army at the Battle of Castiglione on 5 August. Lonato del Garda is located near the SP 668 highway and the Brescia-Padua section of Autostrada A4 to the southwest of Lake Garda.

The Battle of Castiglione saw the French Army of Italy under General Napoleon Bonaparte attack an army of Habsburg Monarchy led by Feldmarschall Dagobert Sigmund von Wurmser on 5 August 1796. The outnumbered Austrians were defeated and driven back along a line of hills to the river crossing at Borghetto, where they retired beyond the Mincio River. The town of Castiglione delle Stiviere is located 10 kilometres (6 mi) south of Lake Garda in northern Italy. This battle was one of four famous victories won by Bonaparte during the War of the First Coalition, part of the Wars of the French Revolution. The others were Bassano, Arcole, and Rivoli.