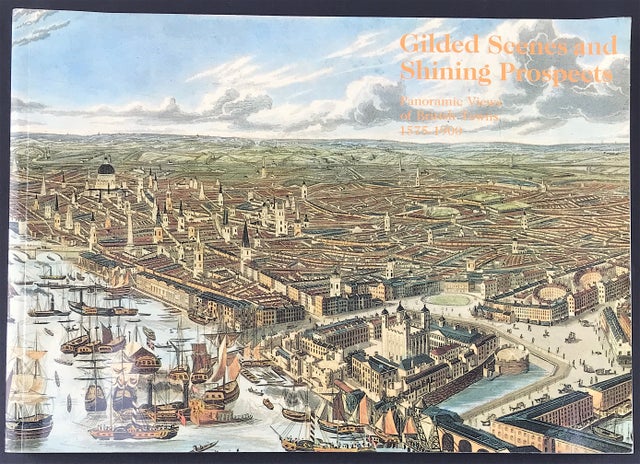 "Wheresoe're I turn my ravished eyes," wrote an enraptured Joseph Addison while traveling in Italy in 1701, "gay gilded scenes and shining prospects rise." This volume deals with the shining prospects of British cities that enraptured so many artists between 1575, when Hoefnagel's portrait of Oxford appeared in Braun and Hogenberg's Civitates Orbis Terrarum, and 1900, by which time the Graphic newspaper ceased publishing panorama giveaways.

Almost all the examples of prospects included in this volume are prints. Those few paintings and drawings which are illustrated and described all had engravings made after them. For this limitation we make no apologies. Prospects and panoramas of towns were essentially manifestations of civie pride. There was virtually no call for oils, which by their nature were likely to be individual. When patronage from City Fathers was forthcoming, when the existence of an antiquarian market could be identified, or when panoramas could be effective in enticing visitors to watering places, multiple copies of the artist's image were what was called for. That meant line engravings, aquatints, lithographs, and wood engravings.Civic chauvinism long dictated the prospect's form. Indeed, for the first two hundred years of the prospect's existence most complied with an unwritten iconographie canon. The title appeared on a banderole held aloft by putti in the center of the sky. The royal arms, flamboyantly emblazoned, appeared at top left, and the arms of the city portrayed were represented proudly at top right. At the bottom was a key to references. There was also a panegyric lauding the city's fine churches, the range of its industries, the vigor of its trade, and the sobriety of its citizens. And there was a dedication to the lord mayor, the aldermen, the sheriffs, and the common council, who doubtless would have contributed from the civic purse for the engraving of the copperplate.

In prospects and panoramas of British towns one finds no slums, no open sewers, no evidence of crime or poverty. Fine architectural landmarks predominate. Where smoke hangs over the townscape, one may be sure it has been positioned there by the artist to obscure those districts he has recorded inadequately.Town prospects are almost always gilded.