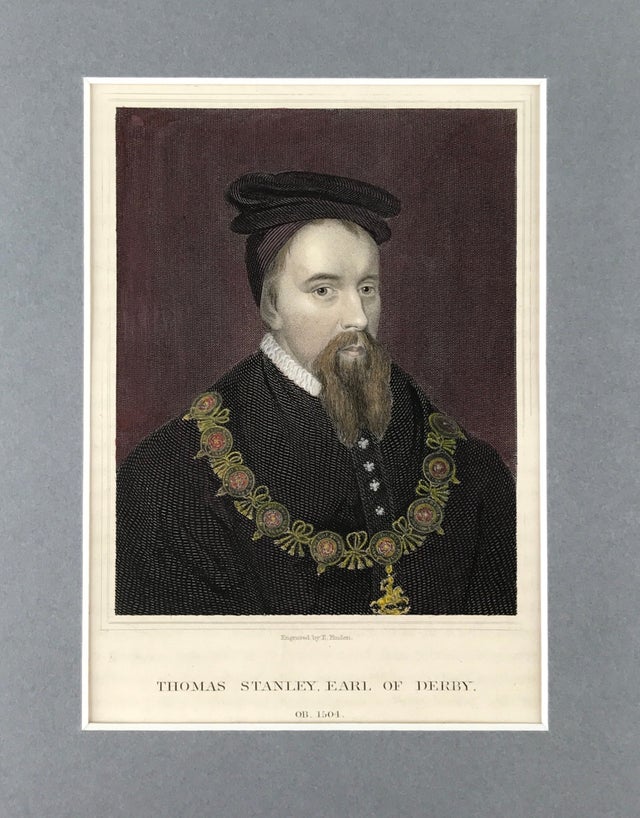 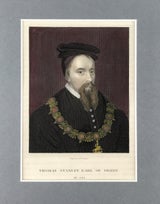 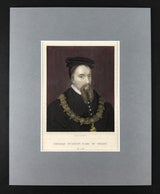 Thomas Stanley, 1st Earl of Derby, KG after the original by Holbein in the collection of The Right Honourable Early of Derby. Here engraved by E. Finden with the addition of later fine hand colour. Published: Portraits of Illustrious personages of Great Britain. Engraved from Authentic Pictures in the Galleries of the Nobility and the Public Collections of the Country. Edmund Lodge, Esq. F.S.A. c1835.

Stanley was an English nobleman and politician. He was stepfather of King Henry VII of England. He was the eldest son of Thomas Stanley, 1st Baron Stanley and Joan Goushill.

A landed magnate of immense wealth and power, particularly across the northwest of England where his authority went almost unchallenged, Stanley managed to remain in favour with successive kings throughout the Wars of the Roses, including King Richard III of England, who took Stanley's son as a hostage. Thomas Stanley took the side of Henry Tudor at the Battle of Bosworth in 1485. His estates included what is now Tatton Park in Cheshire, Lathom House in Lancashire, and Derby House in the City of London, now the site of the College of Arms.