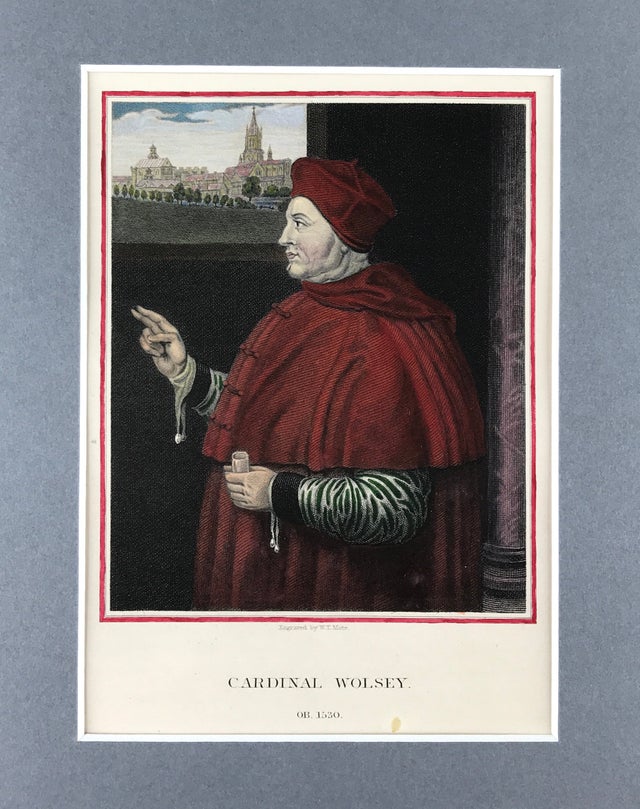 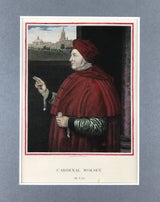 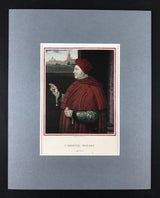 Cardinal Wolsey after the original by Holbein in the collection at Christ Church, Oxford. Here engraved by W.T. Mote with the addition of later fine hand colour. Published: Portraits of Illustrious personages of Great Britain. Engraved from Authentic Pictures in the Galleries of the Nobility and the Public Collections of the Country. Edmund Lodge, Esq. F.S.A. c1835.

Thomas Wolsey was an English archbishop, statesman and a cardinal of the Catholic Church. When Henry VIII became King of England in 1509, Wolsey became the King's almoner. Wolsey's affairs prospered, and by 1514 he had become the controlling figure in virtually all matters of state.

Excerpt from Biographical and Historical memoir:

"His enormous income, which has been computed to exceed that of the Crown, he expended with a magnificence which were it not the best authenticated part of his story, would seem utterly incredible. His houses, witness that yet.remaining at Hampton, were palaces: and his domestic establishment was a Court, maintained with a brilliancy and order which few sovereign princes could emulate. He had eight hundred servants, of whom nine or ten were noblemen, fifteen knights, and forty esquires. He sat on à chair of state, under a canopy, and was approached with all the marks of respect paid to royalty, even to kneeling. Henry, who loved romantic splendour, and abhorred parsimony, encouraged these superb excesses, and even delighted to witness them. It has been usual to charge him with unreasonable pride; but the imputation will be found to rest only on a few instances of his jealous exaction of ceremonious deference to his ecclesiastical rank. that sort was his contest with the Primate Warham, on the question whether his cross should be borne before him in the diocese of Canterbury; a mere question of right and privilege. For the rest, cumbrous grandeur was the foible of the age, and in whom could it be more decorous than in him who represented the ruler of kings, and was himself the most powerful of subjects."