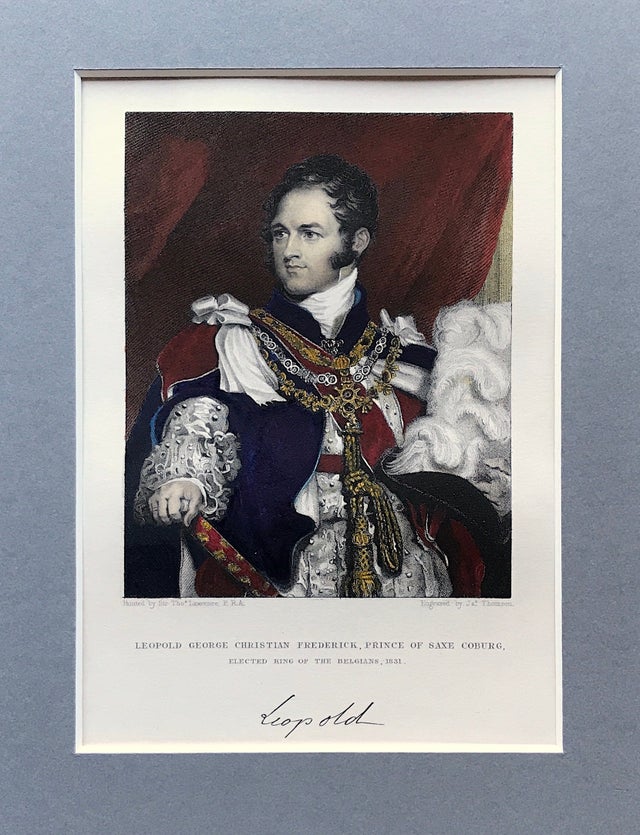 Portrait of Leopold of Saxe-Coberg, Elected King of the Belgians 1831, with facsimile signature and the addition of later hand colour. After the painting by Sir Thomas Lawrence P.R.A. a prominent early 19th-century artist and here engraved by James Thompson Published: National Portrait Gallery of Eminent Personages of the Nineteenth Century. Fisher, Son & Co. 1832.

Sir Thomas Lawrence PRA FRS was a leading English portrait painter and the fourth president of the Royal Academy. Lawrence was a child prodigy. He was born in Bristol and began drawing in Devizes, where his father was an innkeeper at the Bear Hotel in the Market Square.

Leopold of Saxe-Coburg and Gotha was designated as King of the Belgians by the National Congress and swore allegiance to the Belgian constitution in front of Saint James's Church at Coudenberg Palace in Brussels on 21 July. This day has since become a national holiday for Belgium and its citizens.

The Prince Leopold was among the first to start from an inactivity which was so irksome to him, and, long before the campaign had commenced, he was in the midst of the Russian army, leaving all that was most dear to him at risk, for the great cause of his father-land."

He accompanied the allied army to Silesia and Saxony; was engaged in the battles of Lutzen and Bautzen; and, on the expiration of the armistice, proceeded with the army to Bohemia, and thence to the Saxon frontier; where he particularly distinguished himself with the division of cavalry under his command. For his eminent services on those days, the Emperor Alexander invested him, on the field of battle of Nollendorf, with the cross of Saint George, and the Emperor of Austria subsequently conferred on him the order of Maria Theresa.

He was at Leipsic, and throughout the whole of the campaigns which ended in the capture of Paris in 1814. Many of our countrymen formed their first acquaintance with the Prince when he was in the French capital, at this period the gayest of the gay." Hence he passed over to England with the allied Sovereigns, possessed with a natural anxiety to witness the land which had contributed so materially to the great events which had recently been brought about.