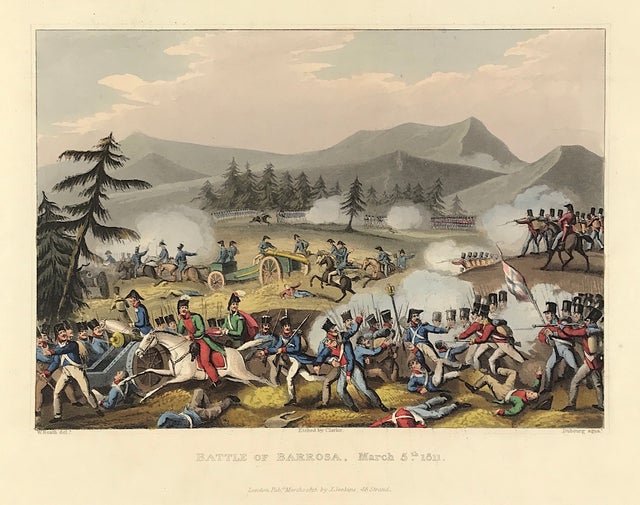 THE BATTLE OF BARROSA.

THE annexed illustration shews the pinewood from which the enemy commenced a most determined and destructive fire on our troops. The centre of the print, or middle-ground, is occupied by the artillery of the enemy in full retreat; and the fore-ground represents the charges of the three companies of Guards and the 87th regiment on the enemy's troops commanded by General Laval.

The following is an Extract from Lieutenant-General Graham's Letter to the Earl of Liverpool, dated Isla de Leon, 6th and 10th March, 1811.

My division being halted on the eastern slope of the Barrosa height, was marched, about twelve o'clock, through the wood towards the Bermesa, cavalry patrols having previously been sent towards Chiclana without meeting with the enemy. On the march I received notice, that the enemy had appeared in force on the plain, and was advancing towards the height of Barrosa. As I considered that position as the key of that of Santa Petri, I immediately countermarched, in order to support the troops left for its defence; and the alacrity with which this manoeuvre was executed, served as a favourable omen. It was, however, impossible, on such intricate and difficult ground, to preserve order in the columns, and there never was time to restore it entirely. But before we could get ourselves quite disentangled from the wood, the troops on the Barrosa bill węre seen returning from it, while the enemy's left wing was rapidly ascending. At the same time his right wing stood on the plain, on the edge of the wood, within cannon-shot. A retreat in the face of such an enemy, already within reach of the easy communication by the sea-beach, must have involved the whole army in all the danger of being attacked during the unavoidable confusion of the different corps arriving on the narrow ridge of Bermesa nearly at the same time . . . .