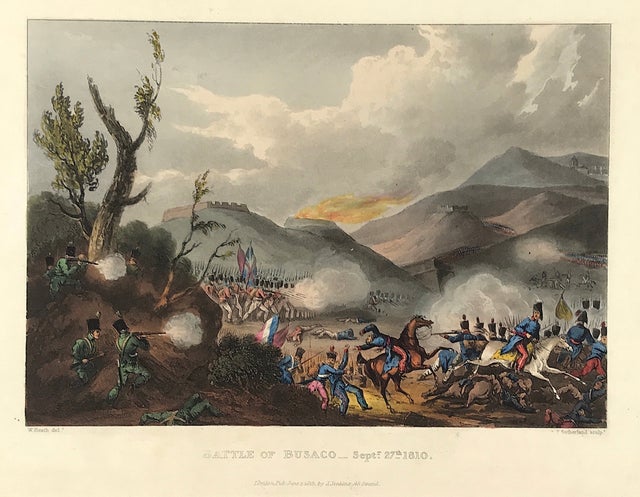 The Battle of Buçaco or Bussaco, fought on 27 September 1810 during the Peninsular War in the Portuguese mountain range of Serra do Buçaco, resulted in the defeat of French forces by Lord Wellington's Anglo-Portuguese Army.

THE Sierra de Busaço is a high ridge which extends from the Mondego in a northerly direction about eight miles, upon the highest point of which, about two miles from its termination, are the convent and garden of Busaço. The Sierra de Busaço is connected by a mountainous tract with the Sierra de Cara. The roads are all very difficult of access to an army, the approach to the top of the ridge being rugged and intersected. It was here the British army completely discomfited the forces of Massena.

At six in the morning of the 27th of September, according to the Gazette Extraordinary of October 15th, the enemy made two desperate attacks upon our position, the one on the right, the other on the left of the highest point of the Sierra. The attack upon the right was made by two divisions of the 2d corps on that part of the Sierra occupied by the 3d division of infantry. One division of French infantry arrived at the top of the ridge, when it was attacked in the most gallant manner by the 88th-(see the Plate)-under the command of the Hon. Lieutenant-Colonel Wallace, the 45th under the Hon. Lieutenant-Colonel Meade, and the 5th Portuguese under Lieut.-Colonel Douglas, directed by Major-General Picton: these three corps advanced with the bayonet, and drove the enemy's division from the advantageous ground which it had obtained. The other division of the 2d corps attacked farther on the right, by the road leading to St. Antonio de Cantaro, also in front of Major-General Picton's division: this division of the enemy was repulsed, before it could reach the top of the ridge, by the 74th regt. under the Hon. Lieutenant-Colonel Freaeh, and the brigade of Portuguese infantry under Colonel Champelmond, directed by Colonel M'Kinnon. Major General Leith also moved to his left, to the support of Major-General Picton, and aided in the defeat of the enemy in this quarter with the 3d bat. of royals and the Ist and 2d batts. of the 38th.