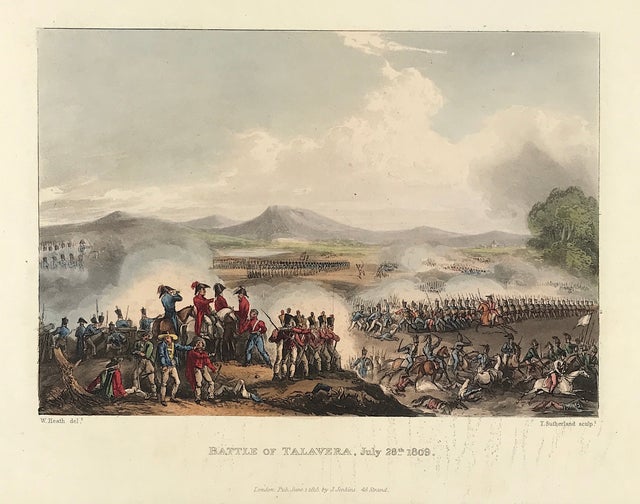 The Battle of Talavera was fought just outside the town of Talavera de la Reina, Spain some 120 kilometres southwest of Madrid, during the Peninsular War. At Talavera, an Anglo-Spanish army under Sir Arthur Wellesley combined with a Spanish army under General Cuesta in operations against French-occupied Madrid.

IN this battle the allied armies of Great Britain and Spain were opposed to more than double their number, the enemy's force consisting of the corps of Marshal Victor and General Sebastiani, of 7 or 8000 of the guards of Joseph Buonaparte, and the garrison of Madrid; the whole commanded by Joseph Buonaparte, assisted by Marshals Jourdan and Victor, and General Sebastiani. The annexed view represents the position. taken up by the troops at Talavera, extending more than two miles: the ground where the British army was stationed, is upon the left, commanded by a height; there is a valley between this height and a range of mountains still fàrther upon. the left. The Tagus is seen in the distance.

The general attack began by the march of several columns of the enemy's infantry into the valley, with a view.to attack the height occupied by Major-General Hill. These columns were immediately charged by the first German light dragoons and 23d dragoons, under the command of General Anson, directed by Lieutenant-General Payne, and supported by General Fane's brigade of heavy cavalry; and although the 23d dragoons suffered severely, the charge had the effect of preventing the execution of that part of the enemy's plan. At.the same time he directed an attack upon Brigadier. General A. Campbell's position, in the centre of the combined armies and on the right of the British. The attack was most successfully repulsed by Brigadier-General Campbell, supported by the king's regiment of Spanish cavalry; two battalions of Spanish infantry and Brigadier-General Campbell took the enemy's cannon. The brigadier-general mentions particularly the conduct of the 97th, the 2d battalion 7th and 2d battalion 59d regiments ; and I was highly satisfied with the manner in which this part of the position was defended. An attack was also made at the same time upon Lieutenant-General Sherbrooke's division, which was on the left and centre of the first line of the British army. This attack was most gallantly repulsed.by a charge with bayonets by the whole division; but the brigade of Guards, which were on the right, having advanced too far, they were exposed on their left flank to the fire of the enemy's battery and of their retreating columns, and the division was obliged to retire towards the original position, under cover of the second line of General Cotton's brigade of cavalry, which I had moved from the centre, and of the lst battalion...