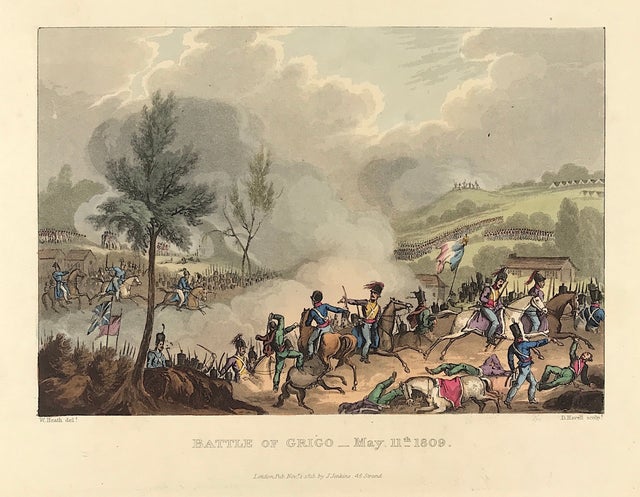 The Battle of Grijó (10–11 May 1809) was a battle that ended in victory for the Anglo-Portuguese Army commanded by Sir Arthur Wellesley (the future Duke of Wellington) over the French army commanded by Marshal Nicolas Soult, during the second French invasion of Portugal in the Peninsular War.

THE British army which remained in Portugal after the retreat of Sir John Moore, did not exceed 10,000 men, independently of detachments and the brigade under Brigadier-General Cameron. Such was the force the enemy would have had to encounter, had he advanced rapidly to the invasion of. Portugal in 1809, immediately after the affair at Corunna: so much indeed was an attack anticipated, that Sir J. Craddock, who commanded at Lisbon, embarked the heavy baggage, and made the necessary dispositions in case of being obliged to evacuate the country. The French army was continually victorious over the Portuguese; they had taken Oporto, had succeeded in Spain, and the whole Peninsula appeared to be fast approaching to a mere province of France, when Sir Arthur Wellesley was appointed commander in chief of the British army in Portugal. He landed at Lisbon 28th April, 1809; and such was the joy throughout the kingdom, that every town, not in the possession of the French, put forth illuminations on the occasion, which continued for three successive nights. On the 2d May, Sir Arthur, who had been appointed marshal-general of the Portuguese troops by the Prince Regent of Portugal, arrived at Coimbra, to take the command of the combined army. On the 6th he reviewed the whole of the troops, and on the 7th they began their march. The first object was to rescue Oporto from the do minion of the enemy. On the 10th, the cavalry and the advance of the army crossed the Vouga, and defeated a considerable body of the enemy's cavalry and infantry.

On the 11th, the advanced guard and cavalry continued to move on the high road towards Oporto, with Major-General Hills division on a parallel road which leads from Ovar to Oporto....