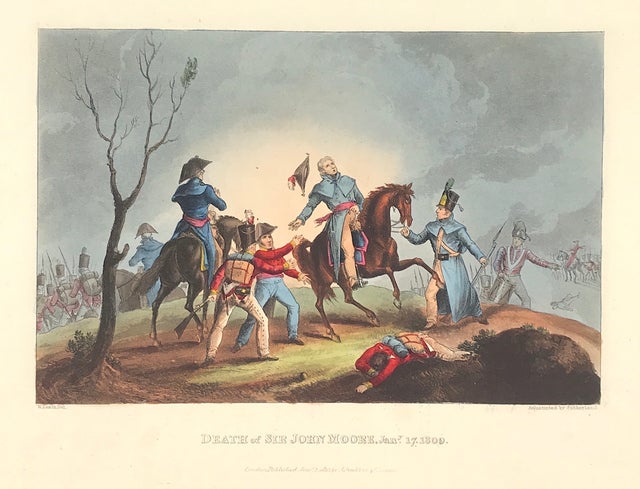 ​Lieutenant-General Sir John Moore, KB was a British Army general, also known as Moore of Corunna. He is best known for his military training reforms and for his death at the Battle of Corunna, in which he repulsed a French army under Marshal Soult during the Peninsular War.

HAVING given a detail of the battle of Corunna in another part of our work, we shall confine ourselves to the documents now before us, relative to the death of the general who planned this glorious retreat, but who fell a victim to those plans, the accomplishment of which he was permitted to witness before he closed his eyes in death. Of the regretted hero of Corunna, Buonaparte was known to exclaim, “ Moore is the only general now worthy to contend with me; I shall therefore “ advance against him in person.” But to the relation before us.

“I was ordered,” says Captain Harding, “by the commander in chief, to desire a battalion 6 of Guards to advance, and I was pointing out to the general the situation of this battalion; our“ horses were touching at the very moment that a cannon-shot from the enemy's battery carried “ away his left shoulder and part of the collar-bone, leaving the arm hanging by the flesh. The “ violence of the shock threw him off his horse on his back, yet did not a muscle of his face alter, “ or a sigh betray the least sensation of pain. I dismounted, and taking his hand, he pressed mine “ forcibly. He cast his eyes very anxiously towards the 42d regiment, who were botly engaged, and “ whom he had just before cheered by, “Well done, 42d! well done, my majors !' His countenance “ expressed satisfaction when I informed him the regiment was advancing. Assisted by a soldier “ of the 42d, he was removed a few yards behind the shelter of a wall, and at length assented “ to be removed in a blanket to the rear; but in raising him for this purpose, his sword, hanging on “ the wounded side, touched his arm and became entangled between his legs. I perceived the in “ convenience, and was in the act of unbuckling it from his waist, when he said, in his usual tone " and manner, and in a very distinct voice, “ It is as well as it is-I HAD RATHER IT SHOULD GO OUT * 6 OF THE FIELD WITH ME. They proceeded with him in a blanket to his lodgings at Corunna, “the soldiers shedding tears as they went."