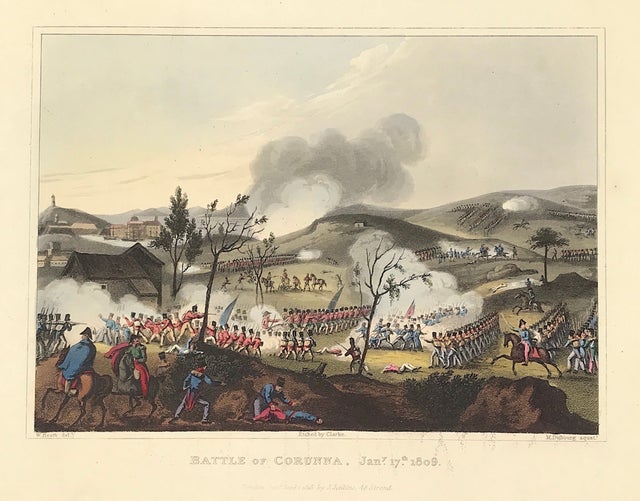 The battle of Corunna, also known as the Battle of Elviña, that ensured the escape of the British army from Spain on 16th January 1809, during the Peninsular War, with the death of Sir John Moore at the moment of success. The winners and losers, well the French; having forced the British army to retreat across north-west Spain, suffering substantial losses the British leave Spain by the port of Corunna. On the other hand, the French felt cheated that the British army was enabled to escape and the British troops considered they had performed well in the battle and their self-confidence was much restored

THE BATTLE OF CORUNNA. AFTER numerous trials and deprivations, the English army, under the command of General Sir John Moore, arrived at Corunna, entire and unbroken, January 11, 1809; and, in a military point of view, the operations were successful and splendid. Nearly 70,000 Frenchmen, led by Buonaparte, with a great superiority of cavalry, had endeavoured in vain to surround or to rout 26,000 British; 250 miles of country had been traversed; mountains, defiles, and rivers had been crossed in daily contact with the enemy. Though often engaged, even their rear guard was never beaten, nor thrown into confusion, but was victorious in every rencounter. Much baggage undoubtedly was lost, and some 3-pounders were abandoned, but nothing was taken by force. What was left was owing to the death of waggon-horses and mules, and not to the escort ever having been defeated. The courage and menacing attitude maintained by the cavalry and reserve were sufficient always to repel and overawe the advanced guard of the enemy; and at Lugo battle was offered by this handful of British to three divisions of French, commanded by their marshals. This challenge was declined, and the impression it made enabled the British to terminate the march almost undisturbed. . . .