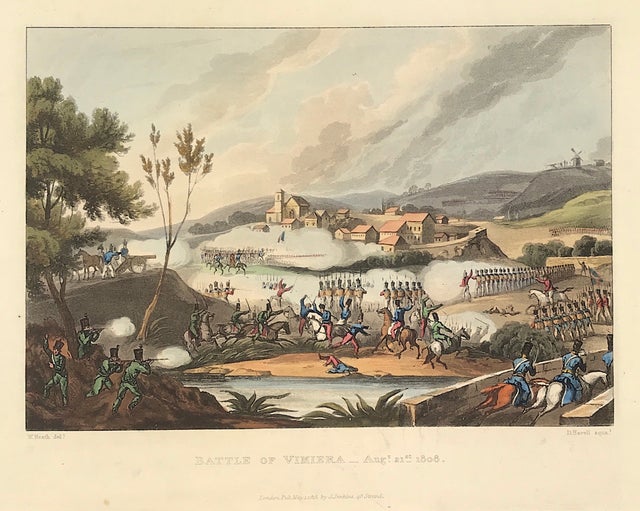 ​Sir Arthur Wellesley’s victory over the French army of Marshal Junot in Portugal on 21st August 1808, his first major victory in the Peninsular War, which nearly ruined his military career. In the Battle of Vimeiro (sometimes shown as "Vimiera" or "Vimeira" in contemporary British texts) on 21 August 1808, the British under General Arthur Wellesley (who later became the Duke of Wellington) defeated the French under Major-General Jean-Andoche Junot near the village of Vimeiro, near Lisbon, Portugal during the Peninsular War. This battle put an end to the first French invasion of Portugal.

THE BATTLE OF VIMIERA. IN this desperate action the British troops were opposed to all the French forces in Portugal, commanded by the Duke of Abrantes, with a great superiority of cavalry and artillery, who sustained a total defeat, although not more than half the British army was engaged. The village of Vimiera, as it is correctly represented in the plate, stands in a valley, through which runs the river Maceira; and to the westward and northward of this village is a mountain, the western part of which touches the sea, and the eastern is separated by a deep ravine from the heights, over which passes the road which leads from Lourinha and the northward to Vimiera. On the eastern and southern side of the hill were posted the riflemen, commanded by Brigadier-General Fane, of whose assistance and bravery Sir Arthur Wellesley speaks in the highest terms of praise.

Extract of a Dispatch from Lieutenant-General Sir ARTHUR WELLESLEY i0 Limb-Gen. BURRARD. The enemy first appeared at eight o’clock in the morning, in large bodies of cavalry, on our left upon the heights on the road to Lourinha; and it was soon obvious, that the attack would be made upon our advanced guard and the left of our position. The attack began in several columns upon the whole of the troops on this height; on the left they advanced, notwithstanding the fire of the riflemen, close to the 50th regiment, and were checked and driven back only by the bayonets of that corps. The 2d battalion 43d regiment was likewise closely engaged with them in the road which leads into Vimiera, a part of that corps having been ordered into the church-yard, to prevent them from penetrating into the town. On the right of the position they were repulsed by the bayonets of the 97th regiment, which corps, successfully supported by the 2d battalion 52d regiment,by an advance in column, took the enemy in Bank. . . .