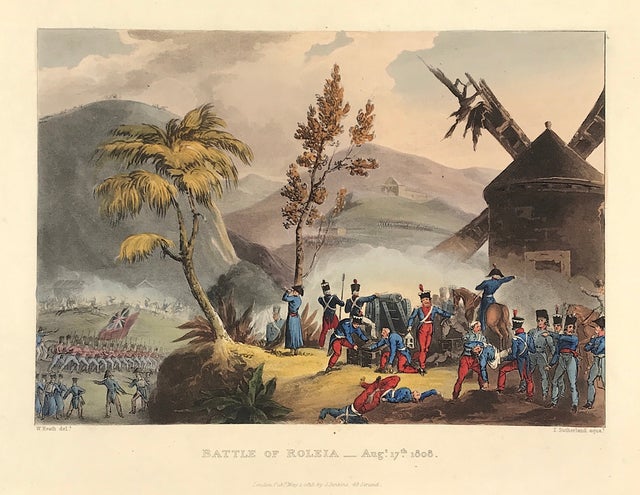 In the Battle of Roliça an Anglo-Portuguese army under Sir Arthur Wellesley defeated an outnumbered Imperial French division under General of Division Henri François Delaborde, near the village of Roliça in Portugal. The French retired in good order. Formerly spelled Roleia in English, it was the first battle fought by the British army during the Peninsular War.

The columns being formed, the troops moved from Obidos about seven o'clock in the morning. Brigadier-General Fane's riflemen were immediately detached on to the hills on the left of the valley, to keep up the communication between the centre and left columns, and to protect the march of the former along the valley, the enemy's posts being successively driven in. Major-General Hill's brigade, formed in three columns of battalions, moved on the right of the valley, supported by the cavalry, in order to attack the enemy's left; and Brigadier-Generals Nightingale and Crauford moved with the artillery along the high road, until at length the former formed in the plain immediately in the enemy's front, supported by the light infantry companies and the 45th regiment of Brigadier-General Crauford's brigade; while the two other regiments of this brigade (50th and 91st) and half of the nine-pounder brigade, were kept as a reserve in the rear. Major-General Hill and Brigadier-General Nightingale advanced upon the enemy's position; and at the same moment Brigadier-General Fane's riflemen were in the lills on his right, the Portuguese infantry in a village upon his left, and Major-General Ferguson's column was descending from the heights into the plain. . .