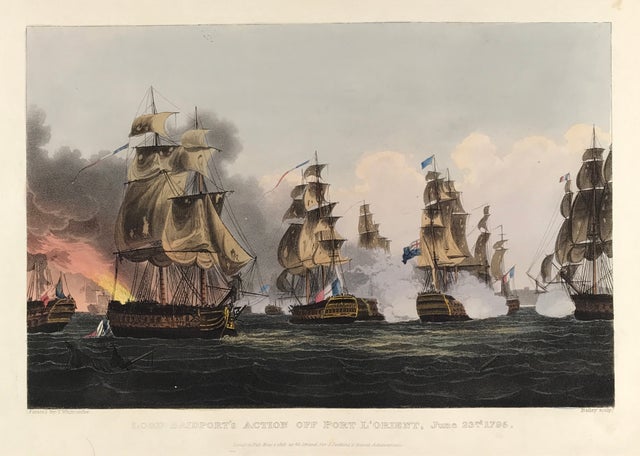 Lord Bridport's Action Off Port L'Orient, June 23rd 1795. Published May 1st 1816. Painted by T. Whitcombe. Engraved by T. Sutherland. Publish'd Feb 1st 1817 at 48 Strand for J. Jenkin's Naval Achievements. Included with the print is the original folio text pages account of the action as first published with the aquatint.

The Battle of Groix was a large naval engagement which took place near the island of Groix off the Biscay coast of Brittany on 23 June 1795 (5 messidor an III) during the French Revolutionary Wars. The battle was fought between elements of the British Channel Fleet and the French Atlantic Fleet, which were cruising in the region on separate missions. The British fleet, commanded by Admiral Lord Bridport, was covering an invasion convoy carrying a French Royalist army to invade Quiberon, while the French under Vice-admiral Villaret de Joyeuse had sailed a week earlier to rescue a French convoy from attack by a British squadron.

ON the 11th June, 1795, the signal was made for the fleet under Lord Bridport, then lying at Spithead, to prepare for sailing; and on the following day they unmoored, and proceeded on their destination. On the 22d, at four o'clock in the morning, being in latitude 47° 4' N. and longitude 4° 16' W. Belle Isle bearing E. by N. 14 leagues, the frigates made the sigınal for a strange fleet, which was soon discovered to be French. They were then right ahead, but the wind shifting, brought them on the weather bow of the British fleet. At six o'clock the admiral made a signal for four of the best sailing ships to chase, and

his lordship followed with the whole fleet: the enemy at this time crowded all sail, endeavouring to escape. The chase continued with very little wind till three o'clock the next morning, when a breeze springing up, brought them within sight of the Isle de Groais, which was discovered from the lee bow. About six o'clock the headmost ships were within gun-shot of the enemy, followed closely by the Queen Charlotte, Irresistible, Royal George, and London.

The annexed view represents that time of the action when the Royal George (to the right) having obliged the Tigre (in the centre) to haul down her colours, is ranging alongside the next in succession; immediately after which, bringing himself within reach of the enemy's batteries, and L'Alexandre and Le Formidable (to the left) having surrendered, the admiral threw out the signal to leave off chase. . . .