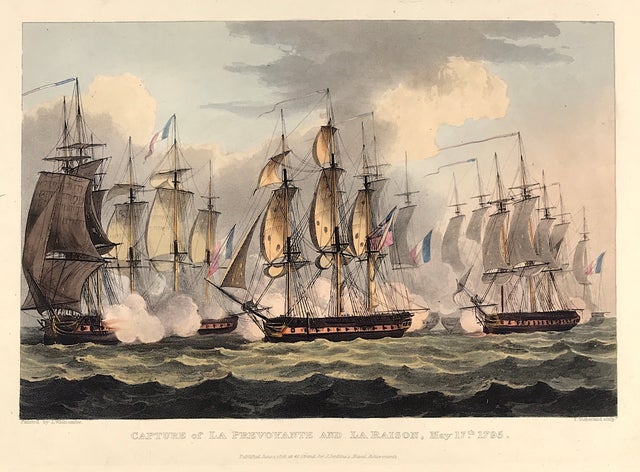 Capture of La Prevoyante and La Raison, May 17th 1795. Published June 1st 1816. Painted by T. Whitcombe. Engraved by T. Sutherland. Publish'd Feb 1st 1817 at 48 Strand for J. Jenkin's Naval Achievements. Included with the print is the original folio text pages account of the action as first published with the aquatint.

On 2 May 1795 Rear Admiral George Murray sent Captain Alexander Cochrane in Thetis, together with Hussar, to intercept three French supply ships reported at Hampton Roads. At daybreak on 17 May the British came upon five ships 20 leagues West by South from Cape Henry. The French made a line of battle to receive the British frigates. An action commenced, with three of the French vessels eventually striking their colours. Thetis took possession of the largest, which turned out to be Prévoyante, pierced for 36 guns but only mounting 24. Hussar captured a second, Raison, pierced for 24 guns but only mounting 18. An hour after she had struck, Prévoyante's main and foremast fell over the side. In the battle, Thetis had lost eight men killed and nine wounded; Hussar had only two men wounded.​

Be pleased to acquaint the Lords Commissoners of the Admiralty, that, in consequence of orders from Rear-Admiral Murray to cruise off the Chesapeak, to intercept the three French store-ships then lying in Hampton roads and ready for sea, I proceeded on the 2d instant with H. M. S. Hussar, and on the 17th, at daybreak, Cape Henry bearing E. by S. distant 20 leagues, we discovered five sail of ships standing to the N. W. with their larboard tacks on board. We soon perceived that they were ships of force: two of them appeared to carry from 28 to 30 guns on the main-deck, one of which had lower-deck ports; the three others from 20 to 24 guns. On observing us standing towards them, they formed a line of battle ahead, and prepared to receive us. At nine a. m. I made the Hussar a signal to prepare to engage the second ship of the enemy's van, intending in the Thetis to attack the centre ship, which appeared the largest, with the two others that formed the rear carrying a broad pendant. By this time we had got within half musket-shot, when the firing commenced on the side of the enemy, which was soon afterwards returned by his Majesty's ships. Before eleven we had closed with the enemy, and the Hussar had compelled the commodore and his second ahead to quit the line (see the annexed engraving), and make sail to the E. S. E. The fire of both ships then fell upon the centre ship and those in the rear. At a quarter before twelve the three ships struck their colours: the two in the rear attempted, notwithstanding, to make of, one of which was soon brought to by the Hussar. Within an hour after the largest ship struck, her main and foremasts went over her side; on taking possession, she proved to be La Prevoyante, pierced for 26 guns on the main-deck, with four other ports, which can be cut out at pleasure, and ten ports below: she had only 24 mounted, part of which they shifted over during the action. The ship the Hussar has taken possession of is called La Raison, carrying 18 guns, but pierced for 24, which, with the other three, had escaped from Guadaloupe on the 25th ult. and were bound to one of the American ports, to take ina cargo of provisions and naval stores for France.

At half past ten the enemy hoisted their colours, the second ship in the van . .