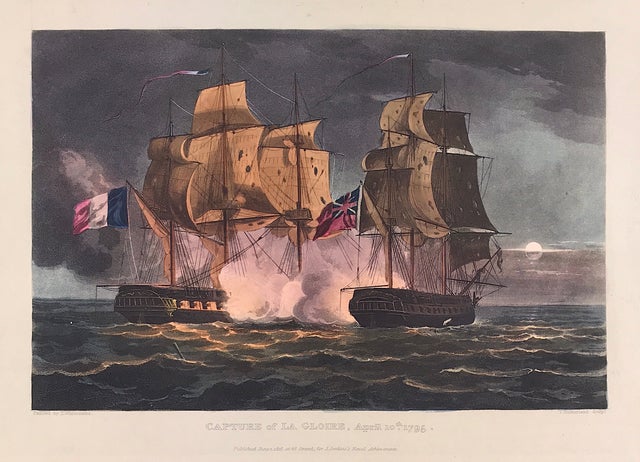 The Action of 10 April 1795 was a minor naval engagement during the French Revolutionary Wars in which a squadron of French Navy frigates was intercepted by a British battle squadron under Rear-Admiral John Colpoys which formed part of the blockade of the French naval base of Brest in Brittany.​

THE following is an extract of a letter from Rear-Admiral Colpoys to Evan Nepean, Esq. Secretary to the Admiralty, dated on board his Majesty's ship London, at Spithead, April 16, 1795:

Please to acquaint the Lords Commissioners of the Admiralty of my arrival here with his Majesty's ships under my command. That on the 29th March, Le Jean Bart, a French corvette of 20 guns and 120 men, bound to Brest, was captured by his Majesty's ships Cerberas and Santa Margaretta. She had been charged with dispatches from the French minister in America.

That on the 30th, the Robust recaptured the Caldicot of Chepstow, for Barcelona, bound to She was taken 18th March, off Cape St. Vinecent, by six French ships of the line, two Guernsey.

That on the 10th instant, we discovered and gave chase to three French frigates, which soo shaped different courses. I made the signal to follow the two which pointed most to the westward. The Astrea, Lord Henry Powlet, with his aceustomed promptitude and attention, kept after the largest and seemingly best goer of the three, with which he closed about ten o'clock at night, and obliged her to surrender after a well-fought action of fifty-eight minutes, which does great credit to his lordship's good conduct.

The particulars are in his lordship's letter to me, which accompanies this.

P.S. The Robust joined me off the Isle of Wight. Captain Thornborough reports, that La Gentille, of 40 guns, was taken on Saturday last by the Hannibal, but that La Fraternité escaped.