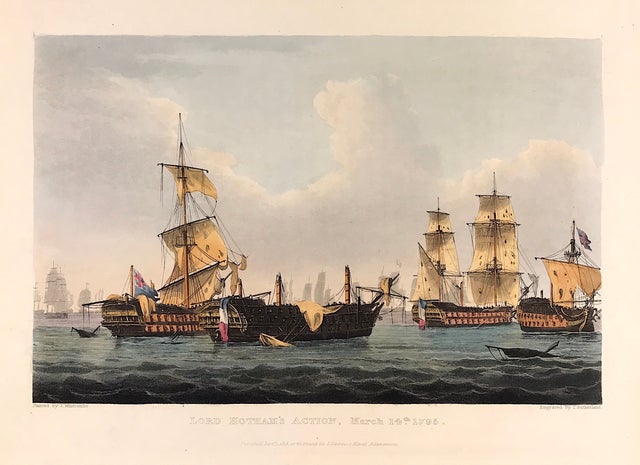 The Battle of Genoa (also known as the Battle of Cape Noli and in French as Bataille de Gênes) was a naval battle fought between French and allied Anglo-Neapolitan forces on 14 March 1795 in the Gulf of Genoa, a large bay in the Ligurian Sea off the coast of the Republic of Genoa, during the French Revolutionary Wars. The French fleet was led by Contre-amiral Pierre Martin and comprised 14 (later 13) ships of the line while the British Royal Navy and Neapolitan fleet, under Vice-Admiral William Hotham mustered 13 ships of the line. The battle ended with a minor British-Neapolitan victory and the capture of two French ships.

ADMIRAL HOTHAM having succeeded to the command of the British fleet in the Mediterranean, was chiefly employed in blockading that of the enemy in Toulon, and in the protection of the Island of Corsica. On the 25th February the admiral was obliged to put into Leghorn to refit, leaving out frigates to watch the enemy's motions, and to give him the earliest intelligence, should they put to sea. The French availed themselves of the absence of the British admiral to sail from Toulon, with the intention of attacking the Island of Corsica. Admiral Hotham having received this information, lost no time in pursuing them, and on the 14th March brought them to action, which ended in the capture of two sail of the line.

The annexed view represents, in the fore-ground, the captured ships La Ca-ira and Le Censeur; the former dismasted, the latter having her main-mast carried away: to the right is the Illustrious, with her foretop-mast, main and mizen-masts gone: to the left is seen the Courageux, with the loss of her main and mizen-masts. Two of the nearest ships in the background, on each side of the view, are frigates coming down, with little wind, to the assistance of the prizes and the disabled ships. The British fleet appears in the body of the background; and a small part of the French fleet, nearly out of sight, to the left.

You will please to inform their Lordships, that on the 8th instant, being then in Leghorn Road, I received an express from Genoa, that the French fleet, consisting of fifteen sail of the line and three frigates, was seen two days before off the Isle of Margaretta; which intelligence corresponded with a signal made from the Moselle, then in the offing, for a fleet in the north-west . . .