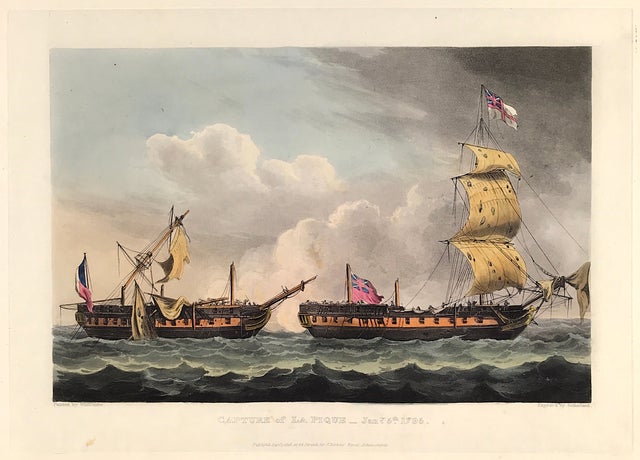 La Pique', a French 40-gun frigate, was captured by 'Blanche', a Royal Navy frigate of 32 guns, after several hours of fierce fighting in the early hours of 5 January 1795, off Guadeloupe, during which 'Blanche''s captain Robert Faulknor was fatally wounded by musket-ball shot. 'Blanche', with only her foremast intact, is shown on the right of the picture in starboard-broadside view, just ahead of, and firing her stern guns at, 'La Pique', whose toppling mizzen is about to leave her completely dismasted.

Copy of a Letter from Lieutenant F. Watkins, First of the Blanche, to Vice-Admiral CALDWELL, Commander in Chief of his Majesty's Ships and Vessels in the West Indies, dated January 5, 1795.

I take the earliest opportunity of informing you of my arrival here with La Pique, a French frigate of 38 guns, belonging to the National Convention of France; which Captain Faulkner brought to action at a quarter-past twelve a.m. Mariegalante E. half S. three miles. It is with the utmost regret I have to inform you, that he fell in the action. In him his Majesty has lost a brave and gallant officer, whom I most sincerely lament, as must every one who knew his merit.

I cannot sufficiently express my thanks to Lieutenants Milne and Pricket, also to the other officers, and the ship's company, for their cool and determined bravery on this occasion; and am happy to add, that the enemy's ship struck her colours at a quarter-past five p.m. From the best information I have been able to obtain, she had 360 men on board when we brought her to action, and I have great reason to suppose her loss to be about 70 killed and 110 wounded.

Inclosed I have the honour to send you the return of killed and wounded on board his Majesty's ship Blanche.