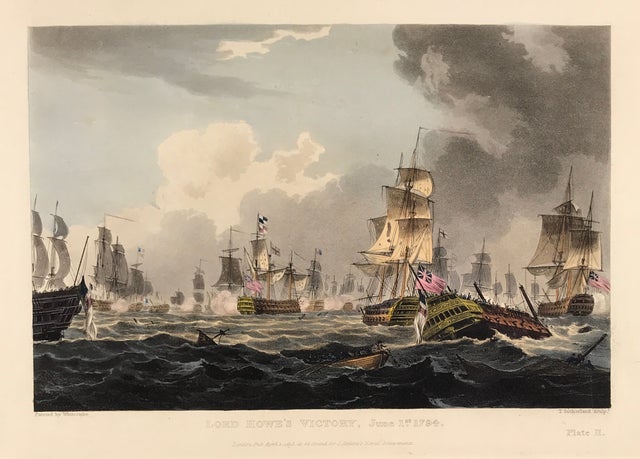 The French fleet of twenty-five sail of the line and fifteen frigates had sailed out of Brest in order to bring in homeward bound merchant ships. The fleet was discovered by the British on 28 May and battle was given on the 29th. The action was interrupted by fog and battle was not re-engaged until 1 June when the British fleet prevailed and captured seven vessels.

Known as 'The Glorious First of June', this action was also known as the 'Third Battle of Ushant'. The British were commanded by Admiral Richard Howe, 1st Earl Howe (1726-99), and the French were commanded by Admiral Louis-Thomas Villaret de Joyeuse (1747-1812). The British defeat of the French was only a tactical victory, the objective of capturing a French grain convoy was not achieved.

PL A T E II From the 29th May till the afternoon of the 31st, the fog continued with little intermission. About half-past one on the latter day, the enemy was discovered in a line about seven miles to leeward. Lord Howe immediately formed his line, but not being able to close with the enemy that day, he hauled his wind on the larboard tack; and the French admiral, following the example, brought the van of the British squadron abreast of the French centre: in this situation they remained the whole night. At five a. m. his lordship made the signal to bear up; at seven the two fleets were within three miles of each other. Lord Howe, after making the signal that he intended to pass through the enemy's line and engage to leeward, and that each ship was to steer for and engage the ship immediately opposite in the French line, bore away for the Montagne.

The annexed view represents the Vengeur sinking, which, after having en gaged the Brunswick from the commencement of the action, was obliged to hoist the British jack as a token of submission, and implored assistance; but the boats of the Brunswick being shot away, she could afford them no aid.

The Brunswick having lost her mizen-mast in the action, and drifted to leeward of the French retreating ships, was obliged to put away large to the northward from them; not seeing her chased by the enemy in that predicament, I flatter myself that she may arrive in safety at Ply mouth. All the other twenty-four ships of his Majesty's fleet re-assembled later in the day; and I am preparing to return with them, as soon as the captured ships of the enemy are secured, to Spithead.

The material injury to his Majesty's ships is, I understand, confined principally to their masts and yards, which I conclude will be speedily replaced.

I have not yet been able to collect regular accounts of the killed and wounded in the different ships. Captain Montague is the only officer of his rank who fell in the action. . . .