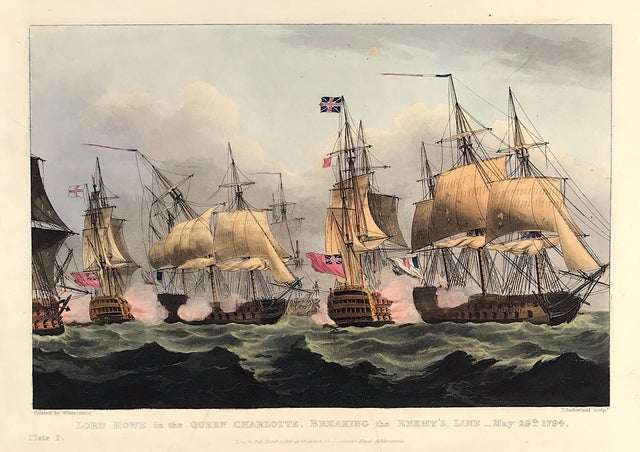 The French fleet of twenty-five sail of the line and fifteen frigates had sailed out of Brest in order to bring in homeward bound merchant ships. The fleet was discovered by the British on 28 May and battle was given on the 29th. The action was interrupted by fog and battle was not re-engaged until 1 June when the British fleet prevailed and captured seven vessels.

Known as 'The Glorious First of June', this action was also known as the 'Third Battle of Ushant'. The British were commanded by Admiral Richard Howe, 1st Earl Howe (1726-99), and the French were commanded by Admiral Louis-Thomas Villaret de Joyeuse (1747-1812). The British defeat of the French was only a tactical victory, the objective of capturing a French grain convoy was not achieved.

Lord Howe's Victory, June 1st 1794. At the commencement of the war in 1793, Admiral Howe was appointed to the arduous command of the Channel fleet; and powers seldom entrusted to a commander were wisely granted to him. By the short cruises he made, and the wise regulations he introduced, the fleet under his command was always ready to engage the enemy, and cleared the way for that brilliant achievement which followed. On the 19th May, 1794, being off Ushant, he received intelligence that the French fleet had put to sea from Brest, under the command of Admiral Villaret: he immediately made every preparation to follow them; and on the 28th a signal was made by one of the look out frigates for a strange fleet. The admiral immediately threw out the signal for the advanced squadron under Rear Admiral Paisley to reconnoitre, who, between nine and ten, discovered them to be enemies. On the 29th the admiral made the signal to form a line of battle ahead; but, being impatient to close with the enemy, he attacked the ship, and broke through the enemy's line. The battle continued with great fury till evening, when a thick fog prevented anything decisive from taking place.

The annexed plate represents the Queen Charlotte passing between the enemy's ships and raking a three-decker. To the left is the Bellerophon, following the glorious example of the commander in chief, bringing down her opponent's top-masts and lower-yards with a starboard broadside, at the same time raking the one to leeward; the Leviathan, with the remainder of the fleet, just coming up . . .