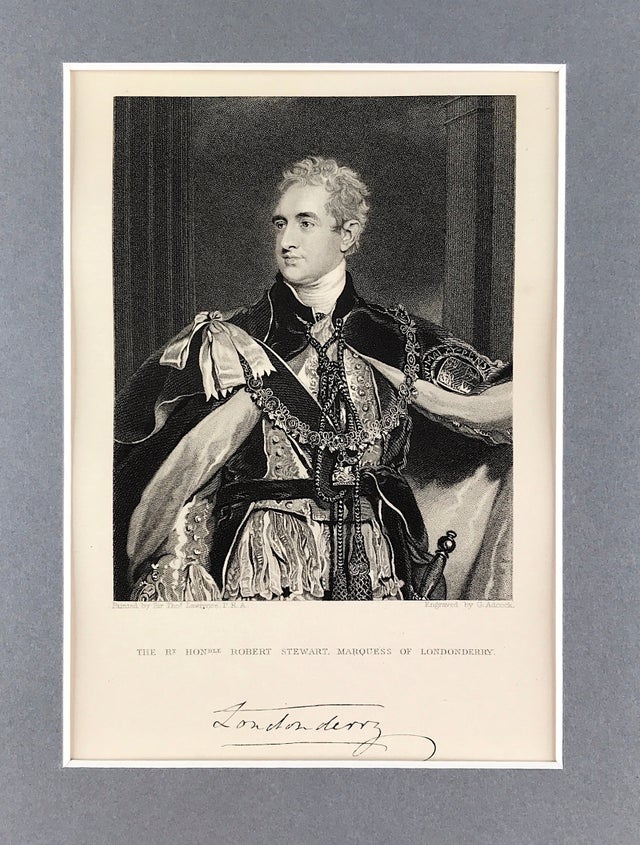 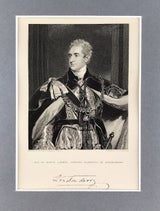 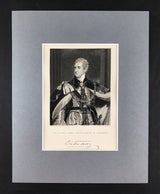 Portrait of The Right Hon Robert Stuart, Marquess of Londonderry with facsimile signature. After the painting by Thomas Lawrence P.R.A. the artist and here engraved by G. Adcock. Published: National Portrait Gallery of Eminent Personages of the Nineteenth Century. Fisher, Son & Co. 1832.

Robert Stewart, 2nd Marquess of Londonderry, KG, GCH, PC, PC (Ire) (18 June 1769 – 12 August 1822), usually known as Lord Castlereagh, derived from the courtesy title Viscount Castlereagh by which he was styled from 1796 to 1821, was an Anglo-Irish statesman. As British Foreign Secretary, from 1812 he was central to the management of the coalition that defeated Napoleon. He was the principal British diplomat at the Congress of Vienna. Castlereagh was also leader of the British House of Commons in the Liverpool government from 1812 until his suicide. Early in his career, as Chief Secretary for Ireland, he was involved in putting down the Irish Rebellion of 1798 and was instrumental in securing the passage of the Irish Act of Union of 1800.