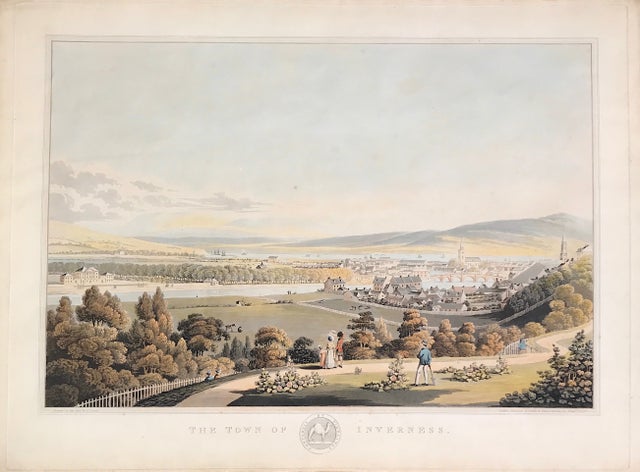 The Town of Inverness c1824

The Town of Inverness. Drawn on the Spot by I. Clark.

Inverness, in the Scottish Highlands, where the River Ness enters the Moray Firth, from the "Views in Scotland" series. The plates are signed I.Clark but it is generally accepted that these views are the work of the Scottish artist John Heaviside Clark, 1771-1836. He was a prolific artist, aquatinter and engraver, sometimes known as Waterloo Clark due to the sketches he made on the field directly after the Battle of Waterloo. He was also skilled in aquatinting, and certainly none of this series has a named engraver.

However he is most famous for his engravings of Scottish towns and cities, admired both for the highly accurate attention to detail and the clarity and softness of aesthetics. The accuracy of the view has historical importance as it documents the radical changes being made to the landscape, a result of industrialisation, population growth and migration.

Note to Buyer: As found, previously not conservation mounted so slight overall tone, and discolouration to the verso of the sheet. The original mount as shown in second picture can be made available with print. This however covers the original title of the print an important feature. This exceptional aquatint print needs to be conservation mounted, framed and glazed.