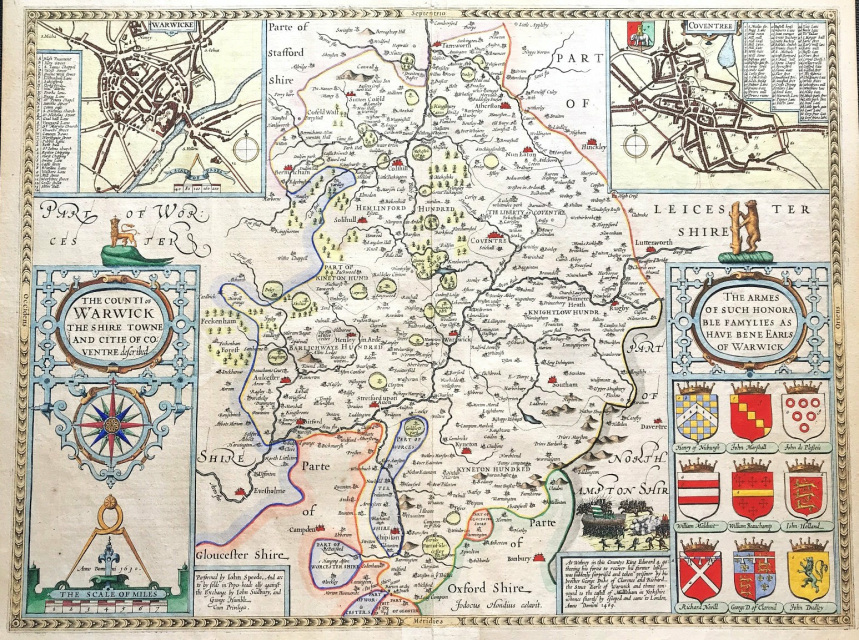 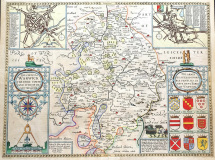 A rare, early printing of John Speed's renowned map of the county of Warwickshire. The map is decorated with plans of Warwick and Coventry, and the arms of "such Honorable famylies as have bene Earls of Warwick".

This finely engraved and detailed map is one of the most sought after of the county and was produced by John Speed, historian, genealogist and cartographer for publication in his "Theatre Of The Empire Of Great Britain ..." the first atlas of the British Isles. The copperplate, engraved in the workshop of Amsterdam master map engraver Jodocus Hondius, was first printed in atlas form in 1612.

John Speed (1552-1629) is arguably the most famous English cartographer of any period as a result of his atlas "The Theatre Of The Empire Of Great Britaine" in which his maps of the individual English counties appeared. The maps are perhaps the best known and amongst the most sought-after of all county maps. The maps themselves were derived from the best and most up-to-date sources available, predominantly those of Saxton and Norden. However, Speed also made innovations of his own - introducing town plans on many of the maps, vignette scenes of topographical, historical or archaeological interest and also the coats of arms of local Earls and Dukes. The overall effect is to produce very decorative, attractive and informative maps.