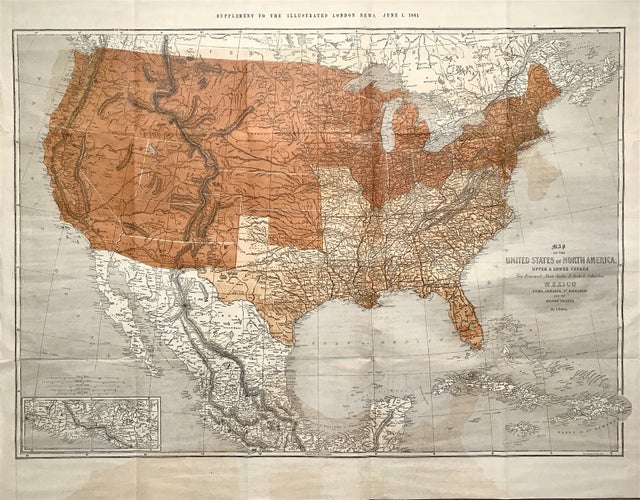 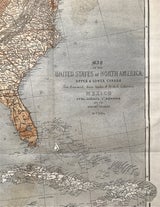 Good condition, some age tone, Good condition, some age tone and offsetting where previously folded, folds as published, small verso repaired tear at lower right boarder: Just right of St Domingo text in title, running at 45 degrees down to boarder. This is hardly noticeable but can be seen on the verso where it has a simple repair. Folds as published.

Notes: An original antique map issued as a supplement to the Illustrated London News on June 1, 1861. This was just a little over a month after the beginning of the Civil War, a war of great consequence and interest to the British public. The map shows the United States, with different colour tints indicating the slave and free states. By June 1st, the Confederacy had reached its final form, which did not exactly follow the free/slave division as shown here, for Missouri, Maryland and Kentucky, all slave states, never left the Union.

The map is colour-coded to show the division between the United States & Confederacy at the onset of the American Civil War. The border states of Missouri, Kentucky and Maryland are noted as being as part of the South. In the West, the proposed Arizona Territory is shown south of New Mexico. Nevada is shown with an early proposed boundary with Utah, and both Washington and Oregon are shown with their eastern boundaries in the Rocky Mountains. This map usually appeared as a supplement to The Illustrated London News.