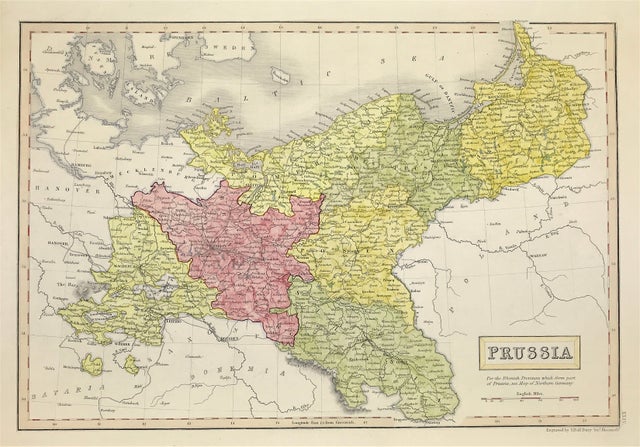 Antique Map of PRUSSIA c1840 Engraved by Sidney Hall. Prussia was a historically prominent German state that originated in 1525 with a duchy centered on the region of Prussia on the southeast coast of the Baltic Sea.

Published: Blacks General Atlas. A Series Of Fifty-Four Maps From The Latest And Most Authentic Sources. Engraved On Steel, In The First Style Of The Art, By Sydney Hall. Edinburgh: Adam And Charles Black.

Sidney Hall was a British engraver and cartographer well known and popular for his early nineteenth century atlases containing maps of the United Kingdom and of the ancient world reproduced from Hall's engravings. Hall made engravings for a number of international atlases at a time when cartography and atlases were very popular. Hall engraved maps for William Faden, Aaron Arrowsmith, and Chapman & Hall, among many others.